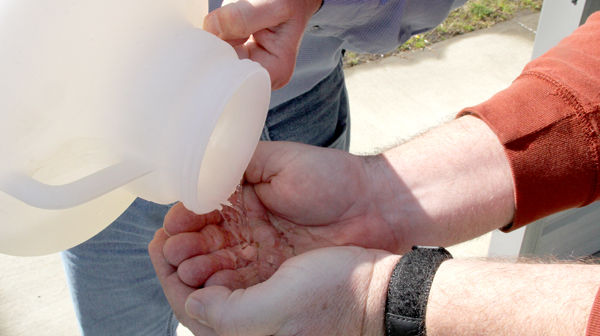 Treated wastewater is clean and clear as shown here being poured from a sample container into the hands of Ahoskie WWTP Superintendent Stewart White. Staff Photo by Cal Bryant

AHOSKIE – While the results of a UNC-Chapel Hill study suggests that treated sludge from municipal wastewater treatment systems may be linked to certain illnesses, local officials operating such systems say they are unaware of such health-related issues.

Researchers at the Department of Epidemiology at the University of North Carolina’s Gillings School of Global Public Health reported earlier this week the findings of their study – “Land Application of Treated Sewage Sludge: Community Health and Environmental Justice.”

The study involved residents from Virginia, North Carolina and South Carolina who live up to one mile from fields where sludge is applied as a soil amendment. More than half of the people interviewed reported acute symptoms such as burning eyes, nausea, vomiting and diarrhea after sludge had been sprayed or spread. Neighbors of fields where industrial swine operations spray waste have reported similar symptoms.

“Study participants told us that the onset of the symptoms occurred while the sludge was being applied or soon after,” says Amy Lowman, MPH, research associate in epidemiology, and the study’s first author. “These were not one-time incidents, either. Respondents reported these illnesses occurring several times, and always after treated sludge was applied to the nearby farmland.”

Other symptoms reported by more than one respondent in the wake of sludge applications included difficulty breathing, sinus congestion or drainage, and skin infection and sores.

“Both of these situations are against state rules. If there is run-off of treated sludge there can be contamination of waterways or neighboring property,” Lowman says. “Livestock are not supposed to graze on sludge-applied fields for 30 days after application.”

In addition, all three states require signs warning that treated sewage sludge is in use on farmland, but several respondents reported that such signage was either not posted or not visible.

Stewart White, Superintendent of Ahoskie’s Wastewater Treatment Plant located south of town on the Johnny Mitchell Road, said that operation follows all state and federal mandates. Thusly, he said the Ahoskie plant has not received any reports of illnesses from residents living within one mile of the plant nor has he been informed of the farming operation that accepts Ahoskie’s sludge receiving complaints.

“If there have been any health issues by those residents in the past, I’m not aware of them,” White stated.

White said Ahoskie’s treatment facility, which opened two years ago at a cost of over $17 million, is a state-of-the-art operation. The treated effluent is now permitted by the state to discharge into the Ahoskie Creek, even though the plant’s spray fields remain active.

“Sludge from our operation settles into the bottom of a holding tank and is hauled away twice a year by Granville Farms (a state-permitted agricultural operation in Granville County),” White stated. “Treated sludge is free fertilizer, bacterial organisms that have broken down into a mixture of nitrogen and potassium, which combined with an application of lime for balance are key ingredients for enriching soil.”

White stated he was in discussion with a local farmer to see if he was interested in using the sludge as fertilizer on his land.

“Right now we’re paying $32,000 a year for Granville Farms to come here and pick-up our sludge; we pay them, not the other way around even though they wind up with free fertilizer,” White stated.

As far as any land application run-off from the spray fields into nearby ditches or streams, White said that is prevented by simply following state guidelines.

“Because of our new operation and the ability to discharge highly treated effluent into the Ahoskie Creek, we do not have to rely on our spray fields so heavily like we once did,” he said.

White has the numbers to back that up, saying that according to Ahoskie’s 2012 report filed to the North Carolina Department of Environment and Natural Resources (NCDENR), the town’s wastewater plant discharged 200.37 million gallons of treated effluent into the creek while the sprayed irrigation part of the operation applied 3.65 million gallons to the fields.

“When we do apply treated wastewater to our spray fields, we disk it in within 24 hours, which prevents any run-off into a ditch that in turn could reach a receiving stream,” he noted. “Plus we follow all setback regulations established by the state in regards to our operation being within a certain distance from occupied dwellings and private wells. We do the proper thing; we do what we are required to do by the letter of the law.”

Operations at the Ahoskie wastewater plant are also well under all limits set forth by NCDENR, which are closely monitored on a regular basis at the plant. For example, two million fecal coliform colonies are allowed per gram of sludge. Ahoskie’s maximum count in that category was 95,544 colonies for all of 2012.

While the Ahoskie operation follows all guidelines, Dr. Steve Wing, who co-authored the UNC-Chapel Hill study and is the principal investigator of the research, stated that most people in towns and cities are not aware of where their sewage sludge goes.

“If they had to live near where it is being spread out, they might be more concerned about this practice. Many respondents in our study said it’s not fair for rural people to bear the burden of urban waste disposal,” Wing said.

Lowman does caution that the study’s findings are based on a relatively small sample size of 34 people and that better tracking of sludge applications and human health is needed to better document relationships between the sludge application and illness.

“However, we are talking about a material containing chemicals and organisms that can make people sick. Although the EPA promotes land application of sludge, it has not said it’s safe for people’s health or the environment,” she says. “More than half of the people interviewed reported similar symptoms. These reports came from individuals in three different states on separate occasions who live up to a mile from areas where sludge was applied. These findings are consistent with previous reports of health impacts and support calls for health and environmental agencies to pay more attention to the potential for sludge to impact people who live near land application sites.”

JACKSON – Cory Jackson, who was found guilty of assault with a deadly weapon last week, is no longer employed... read more