AHOSKIE – Sarah Grace Magette of Ahoskie and Alexander Stafford Britton of Galatia were united in marriage January 26, 2013 at First Baptist Church of Ahoskie during a 5:00 pm ceremony. 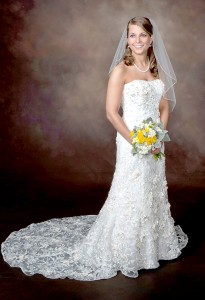 The bride was escorted by her father and was given in marriage by her parents.  The bride wore a fitted trumpet gown by Oleg Cassini. The ivory gown was laced with subtle pink flowers and featured a sweep train. The veil was trimmed in crystals and pearls. The bride carried a bouquet of white hydrangeas, white and yellow tulips and roses, crespedia, dusty miller, yarrow and cotton.

A reception following the ceremony was held at Beechwood Country Club. The Band of Oz provided entertainment for the evening. Mr. and Mrs. Larry Joyner of Ahoskie catered the event. Mrs. Delores Benthall, Ms. Debbie Greene and Mrs. Winnie Matthews beautifully decorated the club keeping with the yellow and gray theme.

The bride is a graduate of MeredithCollege with a B.A. in Psychology and a Master of Arts in Teaching in Special Education. The groom is a graduate of North CarolinaStateUniversity with a B.S. in Agricultural and Environmental Technology. He is employed with Britton Farms in Galatia.

After a honeymoon to Punta Cana, Dominican Republic, the couple will make their home in Conway.

A Bridal Shower, December 15, 2012, at the home of Debbie and Bill Magette, hosted by Allison Wagner and the bridesmaids.

A Monograms and Mimosas Party, January 5, 2013, at the home of Leslie and Austin Lawrence given by Anna Greene, Jo Revelle Murray, Rachel Revelle, Shirley Lee Rountree, and Leslie Lawrence.

A Rehearsal Dinner, January 25, 2013, at HertfordAcademy hosted by Susan and David Britton, parents of the groom.

A Family Dinner, January 25, 2013, at the Magette home provided by Tony of  Napoli’s, Murfreesboro.

Mr. and Mrs. Bill Warrick of Murfreesboro announce the engagement of their son, Daniel Warrick, to Erin Dillaman, daughter of... read more