LAS VEGAS, NV – “Five-Time” (Jimmie Johnson) is planning to be there. So will Dale Jr., Cousin Carl Edwards, the ageless Mark Martin, Big Papa Jeff Gordon and defending Sprint Cup champ Brad Keselowski along with other famous faces on the NASCAR circuit.

Their destination this weekend is the outskirts of Las Vegas, Nevada….the home of one of the favorite tracks among NASCAR drivers. Somewhere within the maze of offices, corporate luxury suites, and operational control rooms at the 1.5-mile speedway is where you’ll find Ahoskie native Chris Powell. 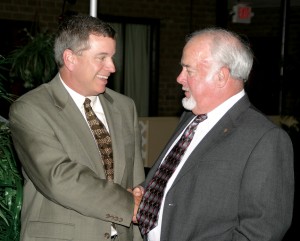 Chris Powell (left) chats with Tommy Oliver during one of his recent trips home to Ahoskie. File Photo by Cal Bryant

Powell, now in his 14th year as President and General Manager of Las Vegas Motor Speedway (LVMS), will be the lead host as Vegas becomes the center of the NASCAR universe this weekend. Nearly 250,000 fans are expected, transforming LVMS into one of Nevada’s largest cities for a single weekend of racing action.

For Powell, the son of the now late Allen and Dorothy “Dot” Powell, growing up in a small town and learning small town values proved as the foundation on which he has built his professional career.

“Las Vegas has a certain allure for its glitz and glamour, but dealing with people is the same no matter where you are,” Powell said in an interview several years ago during one of his trips back to his native soil. “Much of my good fortune goes back to the influences from my youth in Ahoskie and that’s why, to me, Ahoskie has always stood for doing things the right way and Ahoskie will always be home.”

A 1977 graduate of AhoskieHigh School and the recipient of a BA degree in Journalism from UNC-Chapel Hill in 1981, Powell spent the early portion of his career working for United Press International.

In 1988 he was given the opportunity to work at R.J. Reynolds Tobacco in Sports Marketing. There, he spent his first three years working in Public Relations as part of RJR’s involvement on the professional golf tour. That was followed by a three-year PR stint with professional drag racing before he launched a successful five-year Media Relations career with RJR’s NASCAR Winston Cup program.

During his stint with RJR, Powell built personal and professional bonds with some of NASCAR’s biggest stars, including the now late Dale Earnhardt Sr. and Davey Allison. Those bonds also included owners of NASCAR tracks, including the legendary Bruton Smith of Charlotte Motor Speedway. When Smith purchased LVMS, he had one man in mind to lead the operations there.

Moving to Vegas in January of 1999, Powell, armed with the “right way” training learned in Ahoskie, tackled his new job head on. There were issues with traffic as well as improving the track’s image, all now solved as LVMS has quickly become one of the favorite stops for drivers and fans alike.

The competition at LVMS begins Friday and continues through the weekend. The Nationwide circuit drivers will race Saturday in the Sam’s Town 300 (4:15 p.m. on ESPN2). On Sunday (3 p.m. on FOX), NASCAR’s elite Sprint Cup drivers will battle for the top prize in the Kobalt Tools 400.