At their meeting here last week, the county’s Board of Commissioners were updated by County Manager Loria Williams regarding those plans.

“We’ve been working on this project and this process for a couple of years, trying to put together an application to the North Carolina 911 Board for 100 percent funding for an E-911 Center,” Williams told the board. “We have worked closely with the police chiefs in Ahoskie and Murfreesboro along with Sheriff (Juan) Vaughan to develop an interlocal agreement. Everyone has been at the table working on this agreement for the past 12 months and everyone has signed off on it.” 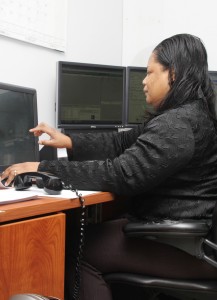 Dispatcher Felicia Gaston works inside the telecommunications room at the Ahoskie Police Department. If a state grant gains approval, APD’s law enforcement communications will consolidate with those at the Murfreesboro Police Department and Hertford County Sheriff’s Office at an E-911 Dispatch Center to be built near Winton. Staff Photo by Cal Bryant

Williams said that she anticipates sending the grant request application to the state by March 1.

“There was some confusion last year as it related to when the (application) deadline was and we missed that deadline at that time,” she said. “This year we are way ahead of the game as the application window is open until April 30. We will have ours in by March 1.”

Hertford County will request a shade over $5,035,840 for the project, one that will combine the county’s current trio of PSAP’s (Public Service Answering Points – Hertford County Sheriff’s Office and the police stations in Ahoskie and Murfreesboro) under one roof.

“For those counties looking to consolidate and provide a more efficient and effective service to its citizens, the state 911 Board likes those types of consolidated services and are willing to fund those types of projects 100 percent,” Williams said.

“A concern I’ve had all along, and I’ve stated it previously, with this proposed consolidation is how it will affect the Ahoskie and Murfreesboro police departments having a person on duty at the station at night to assist a citizen who goes there for help,” said Freeman. “Perhaps that’s a question to ask of officials in Ahoskie and Murfreesboro.”

“You are right, that decision will be left to the towns individually,” Williams said. “That also goes for the county. Do we keep someone at the Sheriff’s Office at night? Or do we have someone at the E-911 Center at night (to handle potential walk-ins seeking assistance).”

“I’ll say this on the county’s behalf, I’m against closing our doors at any time of the night,” Freeman said. “What if a citizen goes up to the door and needs help? There was mention of installing a call box in the lobby (of the PSAP’s). A citizen could pick-up that phone and be directly linked to the E-911 Center. My question then, as it is now, is would we eventually find someone dead holding that phone? If someone is after them and that person runs to the police station for help, they need protection then, not a phone.”

Freeman noted that the new E-911 Center may not be open to the public, meaning he would like to see the Sheriff’s Office staffed at night with a person able to provide immediate assistance if a citizen walked in looking for help.

“Whether or not the E-911 Center will be open to the public is something we need to further study as we put together the standard operating procedures we will follow once that new facility opens,” Williams stated.

“I want it where any one of our citizens can walk up at any time, day or night, and talk to a live person,” Freeman stressed.

Williams said the State 911 Board traditionally makes its announcement of grant recipients by June.

“In the meantime we will move forward with preparation, to include the appointment of a governance board to oversee the operations of the E-911 Center,” Williams said. “Each entity in the county affiliated with this consolidation will be represented on the board. That group will come together to establish the protocols, the standard operating procedures of the E-911 Center.”

According to project’s timeline, the governance board is scheduled to be appointed by March 29 and will meet by April 15. They will be charged with the task of drafting standard operating procedures and protocols by May 31.

If the grant is awarded to the county, the process will begin to hire an architect to design the facility (by Aug. 30); have that design approved by local and state officials (by Dec. 31); launch the bidding process for construction (by Jan. 6, 2014; bidding closes on Sept. 1) and begin construction in September of next year. Pending the completion of integration of the communications equipment and the testing of those items, the new E-911 Center may be open and in service by March of 2016.

The Center will consist of 10,124 gross square feet, to include room to allow for as many as four emergency services dispatcher to work at one time. The facility will also include office space for supervisors, break room/kitchen, restrooms, bunk room, lockers, showers, and storage areas.

“This is a county operated center,” Williams noted. “The E-911 Director will report to the CountyManager. That means HertfordCounty’s governing body has most of the responsibility and authority over that person. All of HertfordCounty’s personnel and travel policies will govern those employed in the E-911 Center.”

Assurance has been given to current dispatchers working the PSAP at the Ahoskie and Murfreesboro police departments that they will be able to carry over their service time to the county if hired to work at the new consolidated E-911 Center.

In April of 2012, an operational budget was presented to the commissioners. There, Williams estimated the total non-reimbursable costs at $489,527 annually. That money will pay for 12 full-time dispatchers, to include their benefits, plus operational costs (electric, gas, maintenance, etc.). As far as equipping the center, the county can tap into its share (as well as Ahoskie’s and Murfreesboro’s share) of the state’s E-911 fund. That fund is built through a surcharge assessed to each land line telephone and mobile phone and then distributed to each emergency dispatch point in the state.

Once the new consolidated dispatch point opens in HertfordCounty, the salaries/benefits paid to the 12 full-time dispatchers will be covered by the county. Ahoskie and Murfreesboro will each contribute to the salaries and operational costs.

Based on population, Williams devised a proportional cost for each governmental entity. The county’s proportional share (based on having 63 percent of the total population, to include all municipalities other than Ahoskie and Murfreesboro) is $285,241 plus $36,763 it currently budgets for operational costs for the dispatch center now located in the Sheriff’s Office in Winton.

Adding the current salaries/benefits for its four dispatchers with the operational costs, Williams said she annually budgets $207,776 in non-reimbursable costs for the county’s E-911 dispatch operations.

On the flip side of the coin, Ahoskie and Murfreesboro will pay less for the merged operations than currently budgeted for their individual E-911 dispatch.

Ahoskie Town Manager Tony Hammond said his budget includes $150,988 in salaries for the staff of five dispatchers. The total budget for Ahoskie’s dispatch point, to include equipment and other costs, is $234,000.

Under Williams’ proposal based on proportion of population, Ahoskie’s 26 percent share of that total would mean the town would pay the county $127,277 for their portion of the E-911 consolidation.

Murfreesboro Police Chief Darrell Rowe said his department’s annual operational budget includes $115,000 in salaries for four E-911 dispatchers. He stated there were additional costs to operate that dispatch point, with those monies coming from the state E-911 fund.

With Murfreesboro accounting for 11 percent of the county’s population base, Williams said the town’s proportional share of operating a consolidated E-911 Center would be $53,848 annually.