LAKELAND, FL – Marianne Boggs and Joseph Hoggard exchanged vows on Saturday February 2, 2013 on the lawn of the Rocking H Ranch in Lakeland, Florida.

The bride is the daughter of Melba and Tom Boggs of Lakeland and the groom is the son of Brenda and Henderson Hoggard of Askewville, NC.

Guests were greeted as they arrived by Haven Hoggard, niece of the groom, of Askewville and Aiden Broomfield, nephew of the bride, of Lakeland, FL. 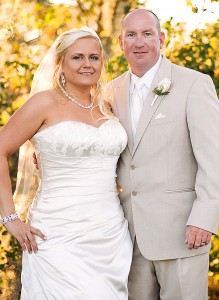 Junior bridesmaids were Fiona Broomfield and Skye Broomfield, Nieces of the bride, of Lakeland.

Henderson Hoggard served as his son’s Best Man. Groomsmen were Greg Hoggard, brother of the groom, of Askewville, Wally McCue, David Rees and Mark Toledo, friends of the groom, all of Lakeland.

The bride wore a white lace gown with a fitted skirt. The dress bodice and her chapel length train were encrusted with rhinestones and crystals. She carried a bouquet of fuchsia and cream roses.

She walked down the aisle alone but was preceded by her two daughters, Ava and Adalynn who served as her flower girls. They wore white dresses with Navy sashes and dropped fuchsia and cream rose petals for their mother to walk on.

Immediately following the ceremony guests were invited to enjoy drinks and hors d’oeuvres by the pool.

The reception was held on the lawn in an area covered by large moss draped trees. Chandeliers hung from the trees and gave the area a fairy tail setting. The tables were draped with fuchsia and navy linens and adorned with lovely arrangements of fuchsia and ivory roses.

Dance music was provided live by the “Sofa Kings”.

The bride and groom danced their first dance as husband and wife to the song, “Amazing Grace”.

After a wedding trip to Jamaica the couple will reside in Lakeland.

December 29, 2012: Meet and Greet at the home of Brenda and Henderson given by the groom’s family.

January 5, 2013: Meet and Greet at Grassland Country Club in Lakeland given by the bride’s family.

February 1, 2013: rehearsal dinner given by friends of the groom and his parents.

February 1, 2013: Lingerie shower given by friends of the bride.