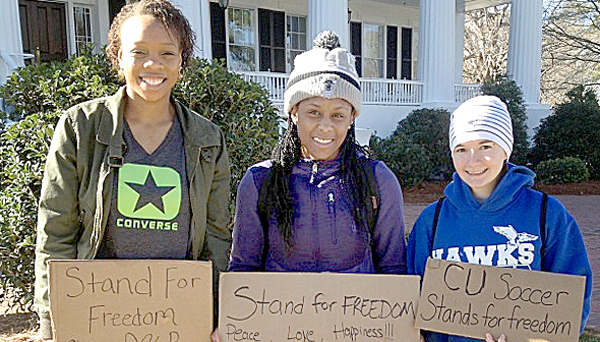 From left, Danielle Coleman and Courtney Smith, both members of the Chowan University women’s basketball team, and Cady Dice (women’s soccer) take part in the International Justice Mission event this past weekend. Photo by Jennifer Harvell

MURFREESBORO – ChowanUniversity is a small school that’s making a big stand; a stance for freedom.

Taking a part in the International Justice Mission (IJM), students at Chowan signed up to join in a stand against slavery. The vision of the IJM is to rescue thousands, protect millions, and prove that justice for the poor is possible. Students at Chowan took the opportunity to help raise awareness of this mission by standing up for this anti-slavery movement.

The stand against slavery began at 8 a.m. on Friday, Feb. 15 and ended at 11 a.m. on Saturday. This 27-hour stand was to represent the 27 million people that are still currently living in slavery around the world.

Students signed up for one hour time slots to go stand outside of the McDowell Columns Building to raise awareness for this cause. They made signs to hold up so anyone passing by could see what they were fighting for.

There was also a petition that could be signed for supporters who felt the need to do something that would help those around the world living in oppression.

Many of the clubs and sports teams at Chowan went out to stand against slavery. From 5-6 p.m. on Friday, the Instruments of Praise (IOP) group sang gospel songs to help gain attention for this slavery uprising.

Cady Dice, one of Chowan’s soccer players, gave this statement about why the anti-slavery movement was so important to her, “Well there’s an estimated 27 million people in the world currently living in slavery, so we’re trying to raise awareness to bring to President Obama to take a stand and try to be proactive about changing this.”

One student who felt especially moved by this stand was Dakota Wilson. He stood for a total of eight hours.

“I just have a heart for the people around the world who don’t need it, especially for the kid slaves, human trafficking, and putting people in the military,” Wilson stated.

Chowan University is a small school with just over 1,300 students, but that didn’t stop it from being one of the most supportive colleges in the nation. With a total of 167 students registering online with the IJM to take part in this event, Chowan was ranked 6th in the nation for the largest turnout. The school with the leading total attendance was Schreiner University in Kerrville, Texas, with 305 participants. Other schools that were listed in the top 10 in the country for largest total support groups were Clemson University, Penn State University, Georgia Tech, and Florida State University.

But this stand wouldn’t have happened without all the hard work put in from the university’s associate minister Tyler Garrard. From sending out emails to talking with students, he made sure that word got around about this event. Many other faculty members also had a large part in helping make this a successful stand.

From bringing baked goods to posting pictures on Chowan’s Facebook page, everyone contributed in some way. To find out more about how the stand went, visit the IJM website or the Chowan Facebook page for more information.