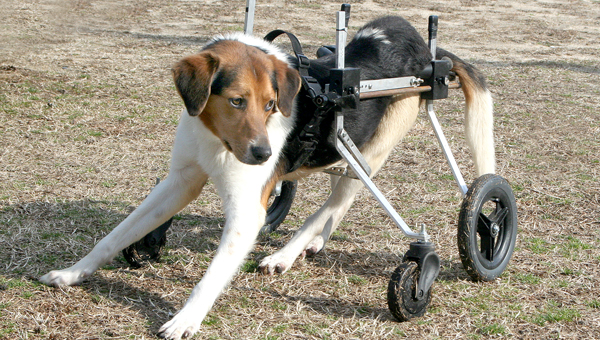 Houstin, a hound dog owned by Patricia Harrell of Margarettsville, shows off his new mode of travel – a K-9 wheelchair. Staff Photo by Amanda VanDerBroek

MARGARETTSVILLE – For Houstin the hound dog, revenge is served best on four wheels and two paws.

On a bright, crisp sunny day, Houstin, with the help of his canine wheelchair, is chasing a group of cackling chickens around the yard of his owner, Patricia Harrell.

Harrell said the chickens would peck at Houstin and steal his food when he was immobile.

Yes, revenge is oh so sweet.

Revenge is only a small part of Houstin’s story; the other part is about how he overcame his handicap.

The nine month old dog’s trouble began when he was about eight to nine weeks old.

“He was really weak so we took him to the vet and they had to run a lot of tests,” said Harrell. “He stayed on some medication to strengthen him.”

The vet discovered the pup had nerve damage to his spine and back legs.

“The vet thinks it might have come from getting an injection or a shot,” she said.

Harrell said she noticed Houstin’s condition at around the same time as his first vaccination, but doesn’t rule out an injury as the culprit because there was another littermate in the pen.

Harrell kept hope that Houstin would recover and decided not to euthanize him.

“I waited to see if he would get better and I kind of got attached to him,” she said. “He’s just got one of those little faces, you just can’t help it.”

The dog lingered for a time without the use of his back legs until Harrell’s son, Patrick Martin, decided he couldn’t watch the pup suffer any longer. He wanted the canine to have the ability to move.

He ordered the wheelchair from K-9 Carts online, intending it to be delivered by Christmas.

The chair was delayed and delivered just after the holiday on Jan. 3, but regardless, for Houstin it was a gift of a lifetime.

Harrell said Houstin was weary at first with his new wheels, but slowly he made progress.

With his new mobility has come physical strength for his unused limbs and new adventures, some of them risky. Harrell said Houstin requires constant supervision while using his wheelchair.

“I have to watch him because he’ll go toward the road and toward the ditch,” she said. “He’s kind of rough on it. He rolled in the ditch one day and went upside down.”

With each moment on his new wheels Houstin has gained confidence and a better quality of life.

Now when Harrell mentions the word “wheels” to Houstin she gets a reaction.

Harrell said she was told by the vet that with Houstin using the chair he may regain use of his one back leg.

“The other back leg I don’t think he’ll have any control over,” she said.

For his future, Houstin has a permanent home with the Harrell family.

“If he gets any faster…I don’t know,” Harrell laughed. “But he’s going to stay here with us.”