Chilled to the bone! 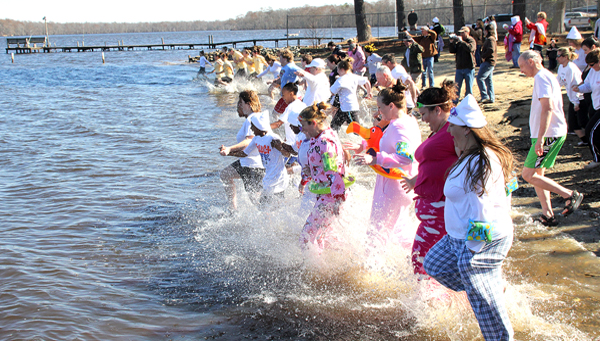 The first wave of approximately 60 individuals race into the cold waters of the Chowan River at Tuscarora Beach on Saturday where they took part in the third annual Polar Plunge to benefit Hertford County Special Olympics. Staff Photo by Cal Bryant

WINTON – Shivers of happiness….that’s perhaps the best way to describe the collective feelings of approximately 60 people that braved the chilled water of the Chowan River near here Saturday.

For the third consecutive year, Hertford County Special Olympics staged a Polar Plunge as a means to generate funds for this worthwhile program that assists children and adults with intellectual disabilities. For each of those years, Riverside Restaurant on the shoreline of Tuscarora Beach has opened its doors to help host the event.

“On behalf of our athletes, our volunteers, and our families involved with Special Olympics, I thank you for your involvement with this program,” stated Lori Heckler, coordinator for Hertford County Special Olympics. “We give special thanks to Riverside Restaurant for their hospitality in letting us stage the Polar Plunge here for the third year in a row. This is a beautiful spot to hold this event.”

“Special Olympics has meant the world to me. I have traveled and met new friends. I have learned to bowl and run track. Please support Special Olympics. It’s a good way to help a child in need,” Fennell said.

“So many of those sponsors joined us three years ago and have remained with us and we really appreciate their involvement in helping to promote our Special Olympics program,” Heckler noted.

Individuals are key to the success of Special Olympics as well. Heckler said generous donations came from HCHS School Nurse Anita Thompson (through a “Pay it Forward” effort with her friends on Facebook) and from Rev. Jeff Douglas and Beth Douglas.

“We also added a ‘beat’ this year by welcoming DJ Jay Jenkins of ‘Shagging on the Beach’ (which broadcasts Sunday afternoons on WDLZ-FM in Murfreesboro),” Heckler said. “It was so much fun to have him here, helping to make this event more entertaining.”

The community involvement even branched out to local government as the Town of Ahoskie’s Parks and Recreation Department allowed Heckler to borrow a large tent for use as a warming and changing area after these brave souls plunged into the river.

To provide a level of safety, Hertford County EMS was on hand, as well as a lifeguard.

As the horn sounded at 12:30 p.m., the plungers showed no fear of the chilly waters….made even more “refreshing” due to the recent cold snap. While many waded out at least waist deep, a few opted to dive underneath the river’s surface. None seemed any worse for their wear upon wading back to shore.

“It wasn’t as cold as I thought it would be,” said one participant, joining her friends on dry ground.

The nursing students – aka, the “Pajamanators” – won the costume contest.

Heckler said the funds raised from Polar Plunge helps to support Special Olympics athletes from Hertford County to compete in volleyball, bowling and track and field. She said there are currently 15 athletes involved in the program.

“The young people involved in Project Unify help serve in several different capacities,” Heckler said. “They accompany us when we travel; they are there with us during our home events. It’s go great to have their involvement.”