Just over a month into her new position as a district court judge, Vershenia Ballance Moody is finding her stride on the bench with vigilance.

As the Aulander native sits in her office at the Hertford County Courthouse she is ever conscience of her history-making election to her current position as the first female judge in the 6B Judicial District. 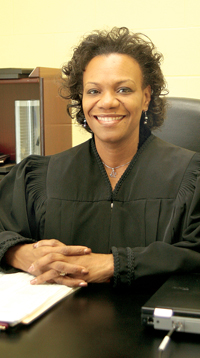 With that comes pressures and expectations from the public as well as her judicial and law enforcement colleagues, but Moody intends to meet those prospects by carving her own path as she settles into her new role.

“It’s been very interesting,” she said, giving a smile while reflecting on her first month as a judge.

Moody said among the things she had to take into consideration before even stepping foot on the bench was how she wanted to be perceived.

“(Former 6B District Attorney) David Beard always said, ‘Perception is reality’,” she said. “I may intend something and it may be the absolute truth, but what’s reality is what people out in the audience perceive.”

She continued by saying, “I had to consider that people in District 6B, on a regular basis, are not used to seeing a woman up there on that bench and I felt like, still feel to a certain degree, there’s a lot of pressure there to do well, to show well, to do the best thing that I can do and make the best decisions that I can make.”

Moody, along with her sister Nicole, grew up with the strong work ethic and guidance of her parents, William “Bill” and Beulah Ballance. Even then, Moody had expectations placed on her for good grades and doing well in school.

“My dad is one of those guys that worked tirelessly, he’s one of those fathers who had a quiet, authoritative presence—just one of those guys where you know he loves you by his actions,” she said. “My mom was more the disciplinarian; the make sure you toe the line person. …Certainly, most everything in my life that I’ve done, when I’ve strived to do different things, I certainly have always thought, ‘What will dad think about it? What would mom think about it?’”

A graduate of Bertie High School, she received a full scholarship to the University of North Carolina at Chapel Hill. During her sophomore year, Moody’s uncle was killed during a domestic dispute. There was an investigation into the incident, but no charges were brought forth.

“That’s what piqued my interest in learning about the law,” she said. “That single event is what got my mind churning about the legal process and (wanting) knowing more about it and how something like that could happen (without consequence).”

Once Moody began law school at North Carolina Central School of Law she developed a quick affinity for civil procedure and the civil process. She admits she shied away from criminal law and procedure because of the types of cases involved.

“I wasn’t sure if I could shoulder that emotional baggage,” she said.

After graduating from law school and receiving her Juris Doctor, she moved to New York and practiced in the Antitrust & Federal Trade Regulation Department. Even though Moody was able to use her knack for civil procedure in her new job it also left her without courtroom experience.

Moody said at the time she was dating someone that was working as a prosecutor and hearing him talk about different cases interested her in criminal law.

After a move back to Bertie County, she began serving District 6B as an assistant district attorney, a position offered to her by Beard who met her at a restaurant on Interstate 95 while Moody was heading to interview with the North Carolina Attorney General’s Office.
In 2005, she began work with the local firm of Webb, Webb & Summey, P.A. in Scotland Neck where she remained until June 2009 when she began a position as a prosecutor in the Judicial 6A District.

During her time working in District 6B, Moody said she got to know the judges, including now retired District Court Judge Thomas Newbern.

“We really had a good teacher-student/mentor-mentee relationship,” she said. “I’ve admired how he did things. I always liked how Judge Newbern would explain what was going on to individuals. Judge Newbern always made a point to explain his rationale and his thinking and why he took the action he did.”

Moody said by observing this she noticed people, even if they didn’t like what Newbern was doing, could not argue with his rationalization for doing what he was doing.

She added first as a prosecutor, and now a judge she is striving to emulate that.

When Newbern told Moody he was going to retire he encouraged her to run for the seat.

“He said I don’t know what you’ve got planned or what you’re going to do, but if you’re interested I think it’s your time and I think you can do it,” she said.

Moody said she has taken into account every aspect from the atmosphere to the tone of her voice as to how she wants to run her courtroom.

It’s a precarious position. Moody has realized she must walk that tightrope of perception while overcoming notions of gender roles and in the end apply the law fairly.

“Women tend to get a different name when we are (tough),” she said. “And it’s easier for a man to come in a take a hard line because that’s the role of a man and how they’re supposed to be, and we (women) are supposed to be softer. But I’ve learned there are many different ways you can skin a cat.”

But Moody’s ultimate goal is making sure the courtroom is accessible to all, a place where citizens should not be intimidated by the process of the law.

“Even though I am the first woman (judge) in District 6B, I’ve had really good examples from women in our neighboring district,” she said. “Having to appear before all of the women in District 6A (Halifax County) I’m able to take some of the things that they do and mold them to my way of doing things as that develops. …They’re all so very respectful of all the people that appear before them, and that is something I have always wanted to maintain.”

Another balancing act to overcome is that of career and family. Moody, who now resides in Gaston, said she relies on the involvement of her husband, Marvin Sr., in helping balance her career and family life, which also includes the couple’s two children, Marvin Jr. “MJ” and Mackenzie.

“When I’m not there he steps in; he’s not mom, but he’s certainly able to do everything in our household that I’m able to do,” she said. “He is truly supportive of my career and my goals. It helps when you have a family, parents and sister that are so supportive. I have a good support system.”

By Cal Bryant Among the numerous items on Reba Green-Holley’s desk is a small sign that reads…..“It’s not where you’ve... read more