Among the numerous items on Reba Green-Holley’s desk is a small sign that reads…..“It’s not where you’ve been that counts, it’s where you’re going.”

In a professional career that now spans over 30 years, Green-Holley has seen a lot of places and experienced almost everything life has to offer, but she is more excited about the future than her past accomplishments.

Despite what she thinks about her history as Director of the Gates County office of North Carolina Cooperative Extension, Green-Holley does have a lot to be proud of, considering two key facts…..she is the first female and the first African American to hold this key position within a county that thrives on agriculture. Prior to her promotion to the Director’s desk in 1995, that position had been dominated for decades by white males. 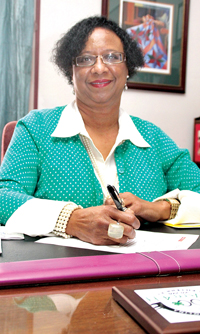 “All things change somewhere along the line; they changed here in Gates County and it took a while for me to be accepted in this role, but once they learned how sincere I was, this office was, about the general health of agriculture here, the old guard began to warm-up to my role as a leader,” Green-Holley said.

Perhaps one of the keys to being accepted was one of the first questions she asked of the county’s farmers at a meeting early in her career as Director.

She solidified her status among the county’s agricultural elite by soliciting the assistance of one prominent local farmer to fend off proposed regulations that would have crippled hog farms.

While most think Cooperative Extension is all about meeting the needs of the agricultural community, the work is much broader than what meets the eye. In addition to agriculture, the Gates County office extends its umbrella to cover Family Consumer Science (FCS), 4-H and Youth Development, and Community Resource Development.

“We have highly trained and qualified agents that can address a variety of issues and offer solutions,” Green-Holley said. “We’re also keen on educating the general public, especially our new audience, the non-agricultural population. There are people coming to Gates County from urban areas and do not understand the importance of farming. Also, many of our kids nowadays do not connect the farm to the grocery store. They need to understand how farming translates to what’s on the dinner plate in front of them. We all work as a team to educate the public.”

Green-Holley said there is an effort currently underway to obtain grant funds to establish a Combine Educational Traveling Classroom – basically a crop harvester equipped with computers and a video screen to show programs that helps viewers understand how farming impacts everyone.

“There’s a component of the obesity program where we go into the local schools and offer a ‘Color Me Healthy’ program,” Green-Holley noted. “FCS also involves financial resource management and works with Medicaid Part D.”

The Cooperative Extension offices in Gates and Hertford counties share Stephanie Parker-Helmkamp in the FCS position.

Green-Holley got her start in Gates County Cooperative Extension in 1981. She was hired as the 4-H/Youth Development Agent. That position is currently handled by Keli Boone, a product of Gates County who grew up through 4-H.

“People say I cloned Keli,” Green-Holley said with a chuckle. “She’s been doing a wonderful job since coming onboard last summer. She knows the locale, she knows the people and she knows the program. By growing up in 4-H (offered to ages 5-18) she understands the philosophy and can pass that on to our young people and take them to the next level.”

While each of the programs offered by Gates County Cooperative Extension are excellent in their own right, Green-Holley said 4-H was a bit different.

“It involves a lot more hours because we can only meet with those kids after their school day ends, meaning all these functions we host for them are at night or on the weekends,” she observed. “It also involves more relationship building….constantly recruiting new members and adult volunteers.”

Gates County 4-H also prides itself in broadening the cultural minds of the youth it serves. Green-Holley said she noted early in her career the lack of exposure that local children experienced from a cultural aspect.

“I worked really hard in exposing our youth to things they were not accustomed to seeing – taking them to Broadway-type performances in Norfolk and other cultural events – exposing them to things that mom, dad and the schools were not,” she stated. “It’s all about broadening their minds and broadening the program to more than cows and cooking.”

While under her watch, Gates County 4-H has expanded to include introducing local youth to science, technology and math training, employability training, leadership/civic education, and after-school care.

Like most Gates County citizens, Green-Holley wants to see the area grow economically. It’s in that realm where the local Cooperative Extension office assists through its Community Resource Development program.

“We were the ones responsible for bringing in the ‘Growing Gates’ program, to assess the economic needs of our county and the available resources we can use to grow our county,” she said. “The Rural Leadership program I’m now working with also fits under this program. Our overall involvement in the community in terms of how we can help with technical assistance is just one of the many things we do here at Cooperative Extension. I feel we have formed a solid partnership with county government and other local agencies to reach closer to our combined goal to improve the way of life here in Gates County and those efforts never end, you always find yourself striving to do more and do it better.”

Community Resource Development is directed by Green-Holley, but she was quick to point out that, “everyone here in some way, form or fashion touches that program.”

As already noted in this story is the fact that the majority of the Gates County Extension Office is staffed by women. Other than the ones previously mentioned, that staff includes office administrative assistants BJ Okleshen and Edna Williams, Nutrition Program Assistant Gina Bonsu,  and 4-H program assistants Edwina Vann, Justina Vaughan, Donald Hendrix and Sylvester Hawkins.

Each of the programs offered through the Gates County office of Cooperative Extension are based on needs assessments. Green-Holley said she was very appreciative of four local advisory councils, all comprised of Gates County citizens, that are instrumental in setting priorities.

“Right now we’re meeting to form our 2013 plan of work,” she said. “The advisory councils representing our four main areas of work represent a broad base of Gates County citizens. We are extremely appreciative of the work they do, the suggestions they make and help to prioritize as we move forward in making Gates County a better place to live, work and do business.”

Even though North Carolina Cooperative Extension funnels state funds to each of its county offices, Green-Holley said there is always a need to seek out and apply for grants from other revenue sources.

“That’s another element of my job, finding the financial resources to implement specialized programs,” she said. “All of these grants are highly competitive, so having prior knowledge, due to my years on the job, of how to properly maneuver through the grant funding maze really helps. Once you start receiving those funds and the need is still there, if you have a good reputation, a proven track record of putting the previous grant funding to good use, then you are more than likely to receive that grant again.”

With 30-plus years on the job, Green-Holley said she has no regrets over her decision to enter this particular line of work.

“I have a job I love, one where I don’t mind getting up everyday and coming to work,” she stressed. “I have a passion for what I do. I wouldn’t trade what I do today or the people I work with with anything else.”

When not visiting with her first – and, to date, only – grandchild (Michael, age 2), Green-Holley occupies her leisure time making homemade jewelry and crafts, which she sells at River Mills in Roanoke Rapids as well as online.

She is also involved with several area organizations, serving on the boards of the Roanoke-Chowan Foundation, Albemarle Foundation, Community Benefits Board, First Citizens Bank Board, State ENC Board, Roanoke-Chowan Partners for Progress, and the Juvenile Crime Prevention Council.

A native of Greensboro, she obtained her BS degree in Home Economics from North Carolina A&T State University in 1976. There she was on the Dean’s List for each of her four years and a member of the Alpha Chi Honor Society.

In May of 1979, Green-Holley earned a Masters of Science degree in Home Economics-Clothing and Textiles from UNC at Greensboro. After a brief stint as an employee of NC A&T, she found her way to rural northeastern North Carolina in the spring of 1981.