TARBORO — The foreclosure sale by PNC Bank of property belonging to State Sen. Clark Jenkins and his wife, Mary, was postponed from noon Wednesday until noon on April 24.

Jenkins, who is serving his sixth term in the State Senate, represents Bertie, Chowan, Edgecombe, Hertford, Martin, Northampton, Tyrell and Washington counties. He is a member of six standing or select committees, including Finance and Commerce. 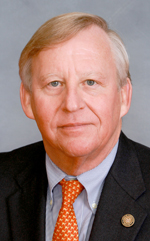 According to public records on file in the Edgecombe County Clerk of Court’s office, the couple took out a $750,000 adjustable rate mortgage with Centura Bank on May 19, 2000. The 30-year mortgage had a beginning interest of 8.25 percent and monthly payments were $5,679.64.

The property, which is listed with the Raleigh real estate firm of Prudential York Simpson Underwood Realty as 522 Cabin Branch Lane, is currently on the market for $1.25 million. The agency website notes that the current selling price reflects a price reduction of $600,000.

Jenkins lists his occupation as “partner” in W.S. Clark Farm according to the Statement of Economic Interest required by state law

In Dare County, at 4042 S. Virginia Dare Trail in Nags Head, a 4,040 square foot beach home valued at $1.146 million is listed under S. Clark Jenkins and in Manteo, a 1,764 square foot condominium valued at $410,500 is listed under Samuel Clark Jenkins and Mary P. Jenkins. According to the Dare County Tax Department, the taxes are delinquent on the Nags Head property in the amount of $3,272.98, including interest.

(John H. Walker is Editor and Publisher of The Daily Southerner in Tarboro and granted permission for this story to be published.)

RALEIGH – Medicaid has long been the savior of low income individuals seeking medical assistance. However, according to a recent... read more