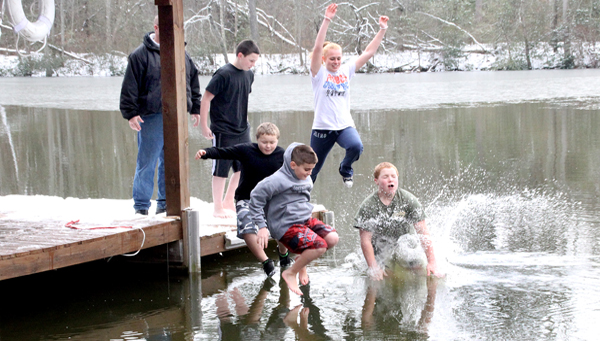 A few brave souls experienced the full chill of the annual Gates County Polar Plunge by jumping off a pier into the icy waters of Beaver Lake on Saturday. Staff Photo by Cal Bryant

EURE – The 2nd Annual Gates County Polar Plunge for Special Olympics was truly “Polar” this year, as one of the county’s rare snowstorms fell on the same weekend.

Cold temperatures did not deter some determined plungers though!  Over 60 plungers still turned out for this fundraising event on Jan. 26, bringing about 40 family members, friends and volunteers to watch and cheer them on at Beaver Lake in Eure.

The youngest plungers enjoyed the newly added Ice Cube Cub event, while the rest took to the docks and the shore.

GCHS Project Unify put on the event for Special Olympics and Beaver Lake Ski club helped to host the event, breaking the ice (literally) and providing a wonderful place for this now popular event!

Bill Pardue helped to emcee the event and encouraged the plungers along the way.  JT Green began the event by bringing the Special Olympic torch and Whitney Bush sang the Star Spangled Banner.

Project Unify Club members and Special Olympics coaches and volunteers were very pleased with the turnout. Over 25  dedicated volunteers braved the snowy roads to set up for the event.  Special thanks to Beaver Lake Ski Club, Gates County Emergency Management and Gates County Rescue Squad for volunteering as well, not only helping to set up, but keeping all of our Polar Bears safe.

The 2nd Annual Chili Cookoff was a success as well.  The prize winners this year were Rachel Moore, with first place; Monjetta Blanchard and Ashley Toti tied for 2nd place, and Lisa Jernigan came in 3rd Place.  Everyone enjoyed the results of over 12 chili chefs, especially the judges.

The Freezin’ For A Reason teams were ready to strut their stuff this year as well. The teams helped to raise money by committing to certain amounts in order to be listed on the Polar Plunge Shirt.  While final totals are not in, the teams definitely outdid themselves not only in collecting donations but the very creative costumes.

The costume contest was quite competitive, with the Sinking Smurfs coming in first place, Ray’s Boards of Education placing second, and the Gatesville Elementary School Slush Puppies in third.

participants left the event, many were already planning their costumes for next year.

The bonfire was quite a popular spot at the plunge.

The Polar Plunge was definitely a team effort, with a dedicated group of volunteers from our school community and the county. It was wonderful to see the enthusiasm and enjoyment shared by the people who participated in this year’s event.

Project Unify would like to send a special thank you to all of the behind the scenes people who worked hard, the people who sent donations of baked goods, s’mores and those who helped get the word out about the weather-related delay.   It was a wonderful day with many members of the community there.

Couldn’t get there?  There are several Polar Plunge t-shirts available for purchase for $15 and Ice Cube Cub Club t-shirts for $8.  Contact Barbara Toti at totibb@gatescountyschools.net.