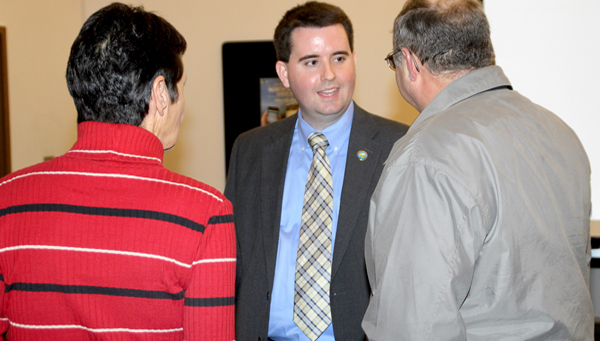 GATESVILLE – Neither rain, nor wind, nor the threat of snow could keep Gates County citizens from meeting their new local government administrator here last week.

Inside the cozy confines of the meeting room at the Merchants Millpond State Park Visitors Center, Jon Mendenhall took center stage. The newly hired County Manager shook hands and chatted with local residents during a two-hour welcoming reception held in his honor.

“I really appreciate everyone coming out tonight, despite this inclement weather,” said Mendenhall. “I look forward to working here in Gates County, serving you, the citizens. We’re all in this together and that’s important to each one of us as we all work towards a common goal of benefitting every single resident of this county.

“We’re glad to have Jon onboard with us. He brings a lot to the table and we’re proud to have him as our new County Manager,” stated Henry Jordan, Chairman of the Gates County Board of Commissioners.

While the event was staged primarily to welcome Mendenhall, it also served another purpose….that of saying thanks and farewell to interim County Manager Kenneth Windley. He was hired by the commissioners in early November following the departure of former County Manager Toby Chappell who left to accept a similar job in Greenwood County, SC.

“Ken has been a great asset to us; he came and took the reigns as Toby was leaving,” Jordan remarked. “Ken’s long career as a manager in several other counties was very noteworthy during his short time with us. His experience in local government shows.”

Jordan stated that Windley was able to come in and keep the county’s current projects running without skipping a beat.

“We want to let Ken know how we feel about him; we want to thank him for all he’s done, to include helping get Jon acclimated to the county,” Jordan said. “We wish him the best in wherever the road leads him from Gates County.”

“It’s been a pleasure to work with the commissioners,” Windley added. “The staff was equally enjoyable and knowledgeable to work with. It was a good learning experience both ways as I picked up on some things and I hopefully left some things here for future use.

Mendenhall said that although his time spent with Windley was short, he learned a lot from the veteran administrator.

“I thank Ken for shepherding me through this period of transition,” he stated. “It’s been a whirlwind tour, but a positive one as I learned a lot from him over a short period of time.”

A native of High Point, Mendenhall has spent the past 20 months as the Deputy County Administrator in Southampton County, VA. Prior to that, Mendenhall has served as Director of Engineering Services for Albemarle, NC; Planning Director for Tift County, GA, and County Planner for Stanly County, NC.

He is an undergraduate of UNC-Chapel Hill, and a graduate of East Carolina University with a Masters in Technology Systems. Additional studies in Project Management have been completed at NC State University.

His first day on the job in Gates County was Jan. 14.

WINDSOR – The new maintenance shop for Bertie County is nearly complete. It is only missing one element – a... read more