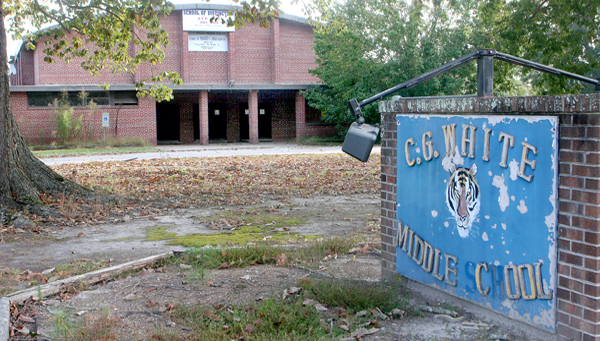 The now closed C.G. White School in Powellsville has become the subject of a bidding war between private individuals wishing to own the property. File Photo by Thadd White

In this case, however, the owner is pleased.

The Bertie County Board of Education is in the process of trying to sell both C.G. White School and the wastewater treatment plant at the facility. And there are buyers who want the property. More than one as it turns out.

In October of last year the two properties were listed for sale in an advertisement that published in the Roanoke-Chowan News-Herald.

Not long after, the school board accepted a bid of $130,000 from Toshia Freeman for the C.G. White School property and an offer of $32,000 from Irvin Ayers to buy the wastewater treatment plant.

Those bids were properly advertised and subsequently upset by Kevin Spivey, who made offers on both properties. His offer for the school was $137,000 and his bid for the wastewater treatment plant was $34,000.

That turned out to be just the beginning of the upset bid process. During their January meeting, members of the Bertie School Board were informed the process was still ongoing. Maintenance Director Matthew Bond said he believed the process would continue as he had received communication that there would be another upset bid.

When Bond made his presentation, the offer for the school was up to $151,145 and the top bidder was Spivey. The wastewater treatment plant top bid was by Ayers and was $46,000.

Since that time Spivey had also upset the bid on the wastewater treatment plant with his offer of $48,350.

Both properties have now exceeded their initial cost value, according to a survey performed by the school district. Bond said the appraised value of C.G. White was $125,000 including the building and the 12.3 acres that went with the property. The value of the treatment plant at C.G. White, including the 35.2 acres of land, was set at $45,000.

Board members expressed their joy that the properties were being sought after and said the funds that come in from the sale would benefit the students.