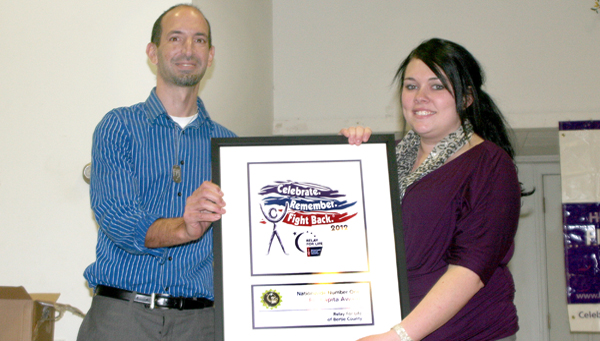 WINDSOR – They did it again.

Bertie County’s American Cancer Society Relay for Life once again is celebrating the top honor in the nation.

During its 2012 celebration and 2013 kickoff events for Relay for Life held last week, Bertie County was honored as the top per capita fundraising event in the nation for its population size (15,000-19,999).

The awards were presented to Codie Bartley, a co-chair of the 2012 event, during the 2012 wrap-up event. It was also announced that Bertie County raised slightly more than $218,000 during 2012.

There were also a myriad of recognitions for teams who had outstanding years in their fundraising and participation during 2012. There were more than 50 people gathered to celebrate the successes.

The Life Inspiration Award was presented to Commander Sherwood Rawls and the Care Giver Award went to his wife, Becky Rawls. The two were unable to attend due to illness.

The Makin Strides Award was presented to West Bertie Elementary School in Kelford while the Making Strides honor was taken home by the Bertie STEM High School team.

The recognition for outstanding school went to Bertie STEM as well while Aulander First Baptist Church was recognized among churches. Southern Bank of Aulander won the award for bank participation.

The Summer Fundraising Award was earned by Ross Baptist Church for raising nearly $3,000 after the Relay for Life event a year ago.

Also honored were the Relay for Life All-Star Teams and those who increased their fundraising efforts.

The Impact Award was presented to Bertie County Schools and the Bertie County Board of Education for their participation in the Relay for Life event as well as allowing the 2012 Relay to be held at Bertie High School.

Following the celebration of the successes in 2012 was the announcement of the co-chairs, goal and theme of the 2013 event in Bertie County.

Taking over the reins of the event will be Artie Johnson and Kathy Cobb. Each said they were excited to be leading the event.

“I know it’s a lot, but there is a reason I want us to reach that mark,” he said. “To date, Bertie Relay for Life has raised $2.75 million and that would take us to $3 million.”

Johnson said the mark would be especially exciting because it would coincide with the 20th year of Relay in Bertie County.

In addition to giving Relayers a challenge, Johnson also gave them a promise. He said if the county raised $250,000 he would have someone shave his head. New ACS staffer Jacob Couglin said he would come up with a plan as well. He said he may kiss a pig if the funds were raised.

Johnson encouraged those who wanted to get involved to start a Relay for Life team and expand the number of those participating in the annual event.

The group also unveiled the latest cover for the quilt being made by Esther Bazemore for Relay. Bazemore makes a quilt each year and donates it to the event. Teams can sell tickets and use the funds as part of what they raise during the year.

Cobb closed the event by saying she was excited to work with everyone. She asked for participants to feel free to offer suggestions so the event could be even better than any of the previous 19.