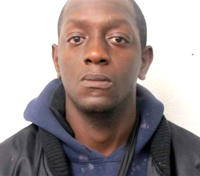 Bertie County Sheriff John Holley reported that his office received a call shortly after 10 a.m. Wednesday that someone had broken into a residence on Cooper Hill Road.

According to information received by the sheriff’s deputies, a neighbor was going by the home and saw a person who appeared to be knocking at a door. Seeing the father of the man who lived at the house, he asked if anyone should be there and the father said no.

The father then made his way to his son’s residence where he reportedly found the front door had been kicked in. He then walked to the rear of the residence and saw a black male exiting the home with his son’s money jar.

The first deputy arrived on the scene within 10 minutes of the call.

Holley said Narcotics Sgt. Dwayne Outlaw and Officer Martin Phelps were in the woods and saw the suspect. Upon the suspect being spotted, Holley, Deputy Alvin Hendricks and others went into the woods to help secure his arrest.

WINDSOR – A Washington County man is under a $90,000 bond after breaking into Bertie High School early Wednesday morning.... read more