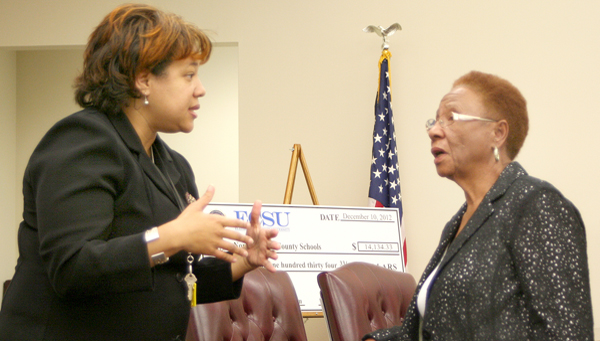 JACKSON –The need for a new high school in Northampton County has been debated on numerous occasions, but now there is a plan that could make the much-needed facility a reality.

On Wednesday, county and school officials met during a working group session at the Northampton County Central Services Office to talk about the need for a new high school and work out a plan to get it done.

Prior to the joint meeting, the Northampton County Board Commissioners met Tuesday morning where they approved a timeline of actions required by the board to achieve the goal.

General obligation bonds require the full faith and credit and taxing authority of the county as security for the debt. The county will raise taxes as necessary to pay the debt. Those bonds are sold with a maximum term of 20 years repayment.

The county’s current “A” bond rating could lower the interest on the bonds.

Among the documents Jenkins presented was a timeline of action required by both boards as well as possible funding sources/combinations that could be used in paying the annual debt payment.

Of the list of possible sources for the high school annual debt payment, Jenkins warned that some came with caveats, including state sales tax reimbursements (Article 40 and 42).

Jenkins noted the school system’s share of that sales tax for the last fiscal year was $43,000 short.

“These sale taxes are dedicated through 2026,” he said.

Jenkins said annual appropriation by the county from the general fund was not currently an option due to the tight budget.

A one-quarter cent local option sales tax as well as a sixth-tenth of one cent land transfer tax were listed as possible sources, but both do require a voter referendum.

Lottery proceeds could also be earmarked for debt payment and ADM funds could be set aside as well.

Jenkins said reprogramming by the county of annually budgeted funds as the county retires its general debt could also be an option.

He noted general debt will be paid off for the Northampton Industrial Park in 2014 and the North Carolina Center for Automotive Research (NCCAR) in 2016.

Re-programming by the Board of Education of annual appropriations made by the county is another choice.

“You could earmark and dedicate a portion of your annual capital outlay appropriations to the county,” he said. “You can dedicate and appropriate your fines and forfeitures that come directly through the court system.”

Jenkins said when he first became county manager the county was budgeting $140,000 for fines and forfeitures and that amount was often exceeded.

“Now we’re only budgeting $100,000 a year and sometimes we don’t make that,” he said. “You can’t tell me there’s not more crime being committed today than it was in 2000. So I don’t think we’re doing a good job of following through with the court system making sure we receive the full benefits of the fines and forfeitures.”

Prompted by Commission Chair Robert Carter, Jenkins also suggested the school system could use county appropriations that are not spent and roll over into the schools’ fund balance.

“An opportunity here is, if the Board of Education is willing, at the end of June each year you could appropriate 50 percent of that fund balance into a set aside capital reserve fund to fund this new high school,” Jenkins said.

The school board could also re-program capital outlay funds appropriated by the county to go toward the annual debt payment.

Board of Education Vice Chair Erica Smith-Ingram asked about a previous discussion in which the two boards discussed a plan to put aside money for five years.

“Did we discuss something about the county commissioners assisting us with that,” she asked.

Jenkins said that dialogue did occur and it was suggested that for every dollar the board of education put forth into that reserve the county commissioners would match that amount.

“That hasn’t happened,” he said.

“Is that something that could be on the table,” asked School Board member Marjorie Edwards.

Wrapping up the possible revenue streams to pay for a new high school is an increase to the tax rate in a range from one to five cents.

“If we were to build a $20 million school it would take 11 cents (on the tax rate) to pay on that, but a combination of these sources to include possibly a two or three cent tax rate increase would likely pay the debt on the school,” Jenkins said. He added it is important for the school board to determine the exact cost of the new high school.

In the timeline presented, the actions required the two boards to publicly endorse and support the need for a new centrally located high school in January.

By April the document has the Board of Education going back to the drawing board to determine the basic design needs to meet student space requirements, and to design on current and predicted decreasing number of students.

The same month the school board appoints a committee to select three potential sites to bring back to the two boards.

June and July will see the scheduling of land negotiations and entering into a two year option to purchase agreement with two, two year renewal periods.

In October the commissioners set a date for the general obligation bond referendum (special or scheduled election).

Jenkins said the timeline is adjustable based on different variables, including if the price of a new high school comes down.

Board member Clinton Williams questioned what could help to tremendously change the timeline.

Jenkins said having a basic design of the high school would help Williams with his answer.

After further discussion, both boards approved the timeline plan to move forward.