WOODLAND –Fifty years after seemingly vanishing into thin air, Phyllis Lorrain Powell’s disappearance remains a mystery. But at least for now there’s a visual image available that can hopefully help lead to her discovery.

For the second time in four months, a forensic artist from Canada has crafted a likeness of Powell’s face in an effort to aid the Woodland family as they continue to search for answers to their loved one’s disappearance on Jan. 11, 1963. 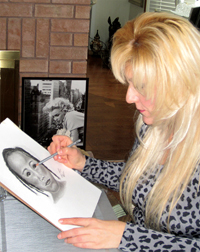 Diana Trepkov of Canada, a Certified Forensic Artist through the International Association for Identification, has become involved in the case of Phyllis Powell who went missing from near her home in Woodland on Jan. 11, 1963. In September, Trepkov penned a likeness of Powell at age 5 and just recently released an age progression likeness at age 55.

On New Year’s Day, Diana Trepkov released her latest work…. an age progression of Powell’s face to 55 years old. Powell was five-years-old when she vanished from Ashe Street in Woodland never to be seen or heard from again.

“If people only knew what our family has been through over the last 50 years they would share any information they have about Phyllis’ disappearance,” said William “Buddy” Powell, the brother of Phyllis, of Woodland. “We have never given up hope that she would be found. This case is in no way closed as we have people like Ms. Trepkov and others from far away working on this and getting things done. All we have to do is put this puzzle together.”

In September of last year, Trepkov, a Certified Forensic Artist through the International Association for Identification, penned a likeness of Powell at age 5. Trepkov caught a flight to Wilmington, NC where she met Lori Roberts of the CUE Center for Missing Persons, the organization that footed the bill for the artist’s trip from Canada. That duo drove to Woodland to meet with Buddy Powell and his sister, Joyce Powell Parker. After five hours of painstaking work, which also involved speaking with the Powell family and soliciting their recollections of what their little sister looked like back in 1963, Trepkov created Phyllis’ likeness.

“They never had a photo of their sister from 50 years ago,” Trepkov said. “I was able to take them back to the time they last saw little Phyllis,” she said. “I also used a (facial) feature catalogue for some reference. In the end they gave it a 10 out of 10. It was an awesome experience.”

Now, Trepkov has followed that work with the age progression likeness. 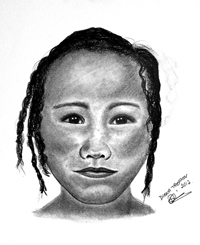 “The process of a missing person’s age progression can be a lengthy one, especially if the person has been missing for 50 years,” Trepkov explained about her most recent effort.  “Many changes would take place in the development of the skull, proportions, fatty tissues and all off the facial features.  A five decade age progression gap is obviously much more complicated than a person missing for only a few years.”

Trepkov said that after analyzing and studying Phyllis’s face, she proceeded with the age progression process.

“Unfortunately there were not any photographs of her so I did the composite drawing strictly from her brother’s and sister’s memory of what they recall their sister would have looked like back in 1963. Not an easy process, but with the proper cognitive interviewing techniques it was possible and very successful,” Trepkov stated. “After studying the family’s photographs I could start to imagine what Phyllis would look like if alive today at the age of 55. Many different changes happen in a person year after year with the aging process. Dark skin people age so beautifully, they usually look a lot younger than they truly are.”

As a veteran artist, Trepkov knows that Phyllis Powell’s facial mass and cranial mass has changed and matured as the years have gone by. 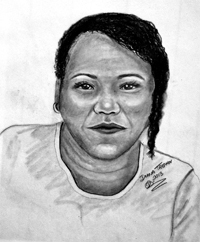 “Her eyes are very unique and they naturally have an upward slant to them,” she noted. “When looking at her eyes in the age progression you can still tell it is Phyllis, as the eyes do tell all about a person.  They are the most important feature on a face and are also known to be the mirror of the soul. I kept her high, beautiful cheekbones with a little bit fatty tissue as this helps for the cheek flesh to sag. The corner of her mouth is aligned with the center of her eye sockets. Her lips are still curved because the dip in her center of her lip was very pronounced when she was young, therefore it would still be very pronounced with age. Adding an earring to Phyllis was my own doing, as I noticed both sisters would wear earrings. Also, I drew her body shape very similar to both sisters.

“Forensic art is an amazing and rewarding career and I feel very blessed to have found my passion and to help many families worldwide. I am hoping Phyllis Powell will be the next missing person we find,” Trepkov concluded.

Trepkov has been involved in over 100 law enforcement cold cases throughout Canada and the United States which involved her forensic artwork techniques such as composites, 2D and 3D facial reconstructions, postmortems, surveillance video drawing and age progressions. More recently she helped solve four high profile cases in the USA.

For Buddy Powell and other surviving members of his family, they still live through the agony and pain of Jan. 11, 1963 when the news broke that Phyllis was missing. She disappeared at around 12 noon that day while playing in the area of NC 35 and Ashe Street in Woodland. Despite a massive search on the ground and in the air involving over 200 individuals, there were no clues discovered on the little girl’s whereabouts, other than a set of small footprints found in an area bordered by a thick woods about one mile from where little Phyllis went missing.

“Phyllis had asked her older sister, Joyce, if she could go outside and play,” recalled Buddy Powell. “Joyce knew it wouldn’t be a problem because of the area that Phyllis was going to play was surrounded by houses owned mostly by family and friends. Little did Joyce or any of us know that within an hour Phyllis would be gone; she just vanished. To this day all I’ve ever wanted is to find out what happened to my little sister.”

A few years ago there was a ray of hope for the Powell family. DNA tests performed on Powell and his brother, Joseph Powell, came on the heels of a cold case involving human bones discovered decades ago in the northwestern part of Northampton County. However, those tests did not reveal a DNA match.

Meanwhile, a Winston-Salem woman, Betty Brown, has shown much interest in the Powell case. As a member of a family with a missing relative of their own, Brown played a pivotal role in getting the DNA tests performed. Brown also contacted the Powell family about using advanced technology to perform another ground search of the area around where Phyllis went missing.

Despite the agony suffered by the Powell family for the past 50 years, they harbor no ill will towards the person or persons responsible for their loved one’s disappearance.

“To whoever is responsible for what happened to our sister, my family has no hate in our hearts for you,” Buddy Powell stressed. “No matter what happened we forgive you, but please understand that we need to know what happened.

“To carry this weight in your heart for 50 years, that has to be hard. So we ask you to take this weight off your heart. The Bible tells us that the truth gives life and the truth will set you free,” he concluded.