WINDSOR – A Washington County man is under a $90,000 bond after breaking into Bertie High School early Wednesday morning.

Bradley Ray Mizelle, 26, of Sexton Farm Road in Plymouth is facing charges related to breaking and entering as well as narcotics due to the incident which happened at shortly before 2 a.m. 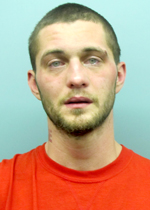 Bertie County Sheriff John Holley said an alarm sounded at the high school at 1:47 a.m. prompting dispatchers to send Bertie County Deputy Beverly Peele to the school under advisement that motion was coming from the school’s snack room near the cafeteria.

When she arrived five minutes later, Peele found a window in the back of the school had been broken. At that point she was advised there was also motion detected in the school’s main office.

Peele was joined by deputies Dennis Little and Doug Jernigan.

Peele found a white male wearing a black toboggan inside the building and the deputies took him into custody. He was identified as Mizelle and found to have a large quality of pills on his person, which was reportedly hydrocodone.

He was placed in the Bertie-Martin Regional Jail under a $90,000 secured bond and will have his first court appearance today (Thursday).

“The response time of the deputies made it possible to make an arrest in this case,” Holley said. “The quick time frame in which they arrived and began working inside the building, I believe, was the reason we made an arrest.”

WINDSOR – A new Bertie High School went from the discussion phase to the construction phase in 2012. The Bertie... read more