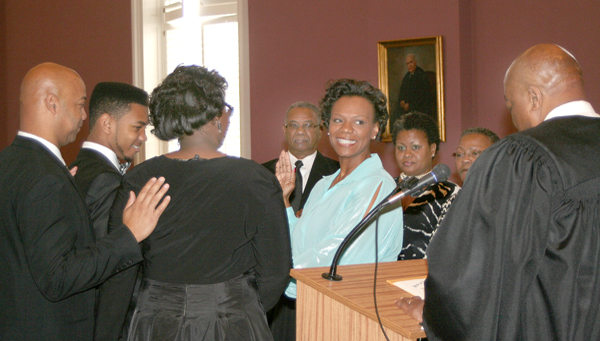 Vershenia Ballance Moody (center) is sworn in as a district court judge by 6B Chief District Court Judge W. Rob Lewis II (right) during a ceremony held at the Northampton County Courthouse in Jackson on New Year’s Day. Moody is pictured surrounded by family members, including, from left, husband Marvin, son MJ and daughter Mackenzie. Staff Photo by Amanda VanDerBroek

JACKSON – She walked into the courtroom a judge-elect and left as a District Court judge.

On New Year’s Day, family, friends, colleagues and interested citizens packed the Northampton County Courthouse to witness Vershenia Ballance Moody make history as the first female to serve as a judge in the 6B Judicial District, which includes Bertie, Hertford and Northampton counties.

Moody’s parents, William “Bill” and Beulah Ballance, assisted their daughter with slipping into her judge’s robe for the first time.

It was that presence of family Moody included in her thanks and remarks along with the knowledge she gained from her judicial colleagues.

“I truly have learned much from all of you,” she said to the District 6A and 6B officials in attendance. “I appreciate the guidance that you have given me and the examples that you’ve set and I look forward to joining your ranks and serving the people of our district.”

She told Judge Newbern that as he left the bench his legacy would never be forgotten.

“As I take your seat I know I could never fill your shoes, but I hope to carry out your legacy as a fair-minded, even tempered judge that cares about everyone that walks into the courtroom doors,” she said.

Moody addressed her constituents by saying she will continue to be ever mindful that she works for them.

Moody added she does not take the responsibilities of her office lightly.

She referred to a recent speech given by Senior Resident Superior Court Judge Cy Grant in which he referenced the dash in obituaries symbolizing “what happened in between” a person’s birth and death.

“I can tell you that with every fiber of my being, while in the midst of my dash, for those that come before me and find themselves in my courtroom I will endeavor to make decisions that makes someone’s life, someone’s situation better,” she said. “I make you that pledge.”

Before her election, Moody was the Assistant District Attorney in neighboring District 6A (Halifax County). A graduate of Bertie High School, she received a bachelor’s degree in political science from the University of North Carolina at Chapel Hill and a Juris Doctor from the School of Law at North Carolina Central University.

After graduating from law school, she moved to New York to work for the law firm of Skadden, Arps, Slate, Meagher & Flom and practiced in the Antitrust & Federal Trade group. Following a move back to Bertie County she served District 6B as an Assistant District Attorney.
In 2005 she began work with the local firm of Webb, Webb & Summey, P.A. in Scotland Neck where she remained until June 2009.

During the ceremony, Moody’s judicial colleagues lauded her past work and the future work she will do as district court judge.

Soon after the opening of court, Grant noted his and Moody’s similar Bertie County roots and educational backgrounds.

“I had a higher expectation from her, a hope from her because of that,” he said. “She far exceeded my expectations.”

Grant said Moody had a reputation for being hard working, smart and focused.

He added Moody would be an outstanding judge that would not only follow the law, but treat people fairly and justly.

“I am honored and I look forward to having you as one of my judicial colleagues,” he said.

“She is very dedicated to everything she undertakes,” she said.

Pelfrey recalled how she once said that if Moody was elected as a judge in District 6B it would be District 6A’s loss.

Pelfrey said it was also an occasion of thankfulness for the present for those that worked and supported Moody during her campaign.

She added it was an occasion of thankfulness for the future.

“The occasion we’re here for today is for a woman who dreamed to do the best she could for her career and for the people in the county that she came from and returned to and is ready to serve in the capacity as a judge in judicial district 6B,” Pelfrey said.

David Beard Jr., retired 6B District Attorney and retired Special Superior Court Judge, recalled how he closely followed Moody’s work and decided to make her a job offer at a restaurant off of Interstate 95 as she was heading to the North Carolina Attorney General’s Office in Raleigh for a job interview.

Beard also spoke about the history of the district, including notable judges and different women who made a difference. He added Moody would reflect well on those who came before her and carry on the heritage.

I have too much to talk about to stay on one topic this week so it is time for another... read more