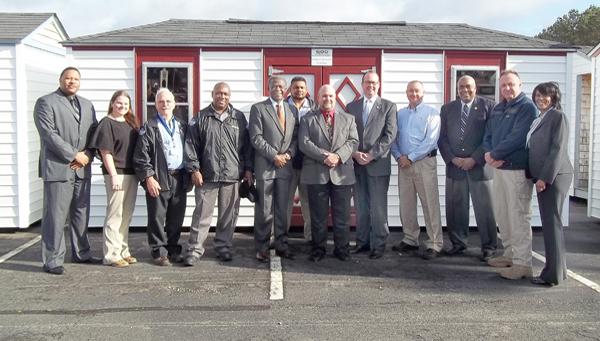 Officials representing several organizations in Hertford County were on hand to accept storage buildings constructed by inmates at Rivers Correctional Institution as part of that facility’s vocational education program. Photo by Candace Matthews

Inmates at the Winton-based facility completed the storage buildings as part of a vocational course offered to them. The course teaches useful skills like plumbing, electrical work, roofing, carpentry, and construction.

Horatio Douglas is the Education Director for Rivers Correctional. He explained how the course works and its benefits to the participants. The program accepts around 45 students per “semester” which encompasses 16 weeks and the students are separated into three groups with three instructors. The class works just like a day job, with the students working from 8 a.m. until 3 p.m. each day during the 16-week period.

Upon completion of the program the inmates receive official certification through the National Center for Construction, Education, and Research. They receive a small wallet card to carry and a certificate.

A large project concludes the program. This time around that project was to build storage sheds.

Douglass remarked of the course that, “It is very popular; we have a wait list to get in to the program.”

He also explains that many of the Rivers inmates are from the DC area where construction is a large employment industry. The inmates will be returning home with valuable skills in their area.

The storage sheds were finely crafted and fully finished, including paint and even a porch on one unit. The agencies were excited about the sheds.

John Tayloe is a representative from Chowan University and also a member of the Rivers Community Relations Board. Tayloe explained, “With the expansion of athletic complexes at Chowan we are losing significant storage so this will meet that need.”

The campus is about to lose a storage building on the golf driving range, as that will be the location of the new tennis courts.

Wendy Burgess, a representative from the North Carolina Cooperative Extension Office in Winton, said, “We have very little storage in the office and it is very exciting to have some storage for our supplies so we can continue to expand our programs.”

The warden also announced that, “This is just the beginning.” He hopes to continue the program and to distribute many of the projects that are created in the process. One of his goal projects is to create something for children to stand under while waiting at bus stops.

WINTON – Charges were made against a public school employee last year. Despite those charges being cleared, the father of... read more