POWELLSVILLE – Ashley Christine Futrell and Matthew Keith Davis were married October 20, 2012 at the home of Robert and Melody Futrell, the bride’s parents.

The bride was escorted by her father. Megan Phelps, cousin of the bride served as matron of honor. Bridesmaids were Kristin Futrell and Amanda Perry of Ahoskie, Kristina Marshburn and Ashton Martin of Greenville and Allison Evans of Maryland. Kinley Phelps served as the flower girl.

The groom’s father and brother served as best men. Groomsmen were Justin Futrell of Ahoskie, Tyler Woglom and Nick Marshburn of Greenville, Jason Hill of Wilmington and Mac Griffin of Lewiston. Reid Futrell served as the ring bearer.

Mrs. Sandra Williams, aunt of the bride, served as mistress of ceremonies. Brittany Futrell served as the program attendant. Flowers and decorations for the wedding and reception were made by Cecil Holloman Jr and the bride’s family and friends.

A reception hosted by the bride’s parents was held at Beechwood Country Club following the ceremony.

Following a honeymoon to St Lucia the couple will reside in Ahoskie. 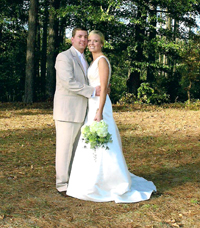 WINDSOR – It was a vintage wedding as the vows of Amy Cheree Denton and Bryan Givens were solemnized on... read more