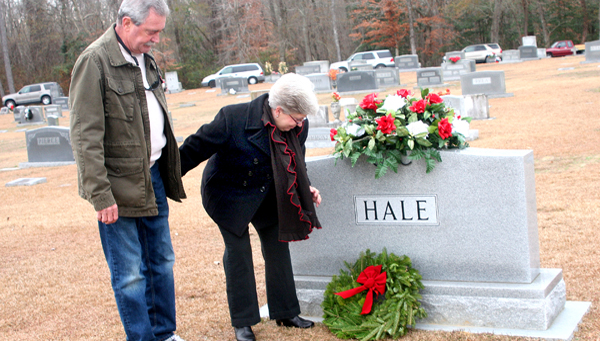 Len and Dennis Joyner lay a wreath on the grave of her father, O. Wint Hale, during the Wreaths Across America ceremony held Saturday at Edgewood Cemetery in Windsor. Staff Photo by Thadd White

WINDSOR –  Edgewood Cemetery was one of thousands of sites for the annual Wreaths Across America event here Saturday.

A handful of people gathered at the cemetery at 12 noon to remember the veterans who have served and who have since died. Similar events were held all over the country.

Wreaths Across America is a nonprofit organization founded to continue and expand the annual wreath laying ceremony at Arlington National Cemetery begun by Maine businessman Morrill Worcester in 1992.

The local event is coordinated by Len Joyner and is in its second year.

The ceremony began with a moment of silence for those whose last known status was Prisoner of War or Missing in Action. Then the VFW Post 6060 of Elizabeth City presented colors and the gathered audience pledged allegiance to the American flag.

“We are gathered here and at sites all over America as one nation under one flag,” Joyner said. “The freedoms we have did not come without a price. Lying here before us and in cemeteries all around the nation are those who gave their lives for those freedoms.”

She also thanked those in attendance who have previously served in the United States Armed Forces.

“We are here to say thank you and we are honored to know you,” Joyner said.

She also encouraged those in attendance to take time to say thank you to veterans and those who are currently serving.

Joyner used a quote from the late President Ronald W. Reagan as a reminder that many have fought for the freedoms in our country and that more may have to do so in the future.

“Freedom is never more than one generation away from extinction. We didn’t pass it to our children in the bloodstream. It must be fought for, protected, and handed on for them to do the same, or one day we will spend our sunset years telling our children and our children’s children what it was once like in the United States where men were free,” Joyner said as she quoted the late President.

Wreaths were then hung for each branch of the service during the ceremony. Retired Windsor Mayor Bob Spivey hung the wreath in honor of the U.S. Army for the second consecutive year. Honoring other branches were Otho Hale (U.S. Navy), Donna Adams (U.S. Air Force), Dennis Joyner (U.S. Coast Guard), Joe Hale (U.S. Merchant Marines) and Lowell Spivey (in honor of the 93,129 POWs and MIAs).

Windsor Mayor Jim Hoggard welcomed those who attended and said he remembered flags being put on the graves at the cemetery on Veteran’s Day when he was young. He said then it didn’t take much time, but that was no longer the case.

He said the freedoms the men and women gave their lives for were “remarkable” and said he honored their sacrifice and service.

As a show of honor and respect, the VFW Post had a 21-gun salute and then played “Taps.”

Following the ceremony, the group dispersed to lay the wreaths at the graves of the soldiers.

“I am in awe of the veterans buried at Edgewood,” Joyner said after the event. “Pate Harden expressed it well Saturday when he said something along the lines that these guys who fought in World War I and World War II had probably never left Bertie County, but were willing to go to another country and fight four our nation’s freedom. It’s pretty remarkable if you think about it.’

Joyner said she remember her Mama Spivey passing out poppies and receiving donations in memory of veterans in front of Henry Ward’s grocery store and that prompted her involvement in Wreaths Across America.

“My hope is that it will continue to grow,” she closed. “We cannot forget.”

WINDSOR – Midway through next year, the Windsor Police Department will change leaders. Recently, the Windsor Board of Commissioners accepted... read more