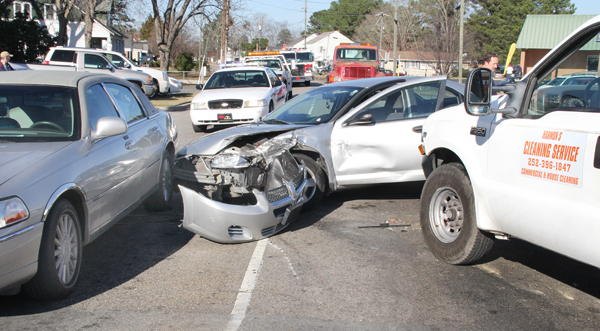 Shown here are three of the vehicles involved in an early afternoon accident on Wednesday at the intersection of Catherine Creek Road and Memorial Drive in Ahoskie. Staff Photo by Cal Bryant

AHOSKIE – One driver that failed to yield the right-of-way touched off a five vehicle accident here shortly past 1 p.m. Wednesday at the intersection of Memorial Drive and Catherine Creek Road.

Even though five individuals were taken toVidant Roanoke-Chowan Hospital as a result of the pile-up, none were believed to be seriously injured.

Ahoskie Police Sgt. Tyrone Ruffin charged the driver of a pick-up truck with failure to yield the right-of-way. That truck was attempting to turn left off Memorial Drive onto Catherine Creek Road when it was struck by a van heading west on Memorial Drive.

Meanwhile, three passenger cars were stopped for the traffic light in the turn lanes of Catherine Creek Road. The impact between the truck and van caused the truck to veer into one of the stopped cars, thus resulting in that vehicle impacting two others in the turn lane.

None of the names of those involved in the accident, including the driver that was charged, were released by the Ahoskie Police.

Along with the Ahoskie Police, the Ahoskie Fire Department and several Hertford County EMS units responded to the scene.