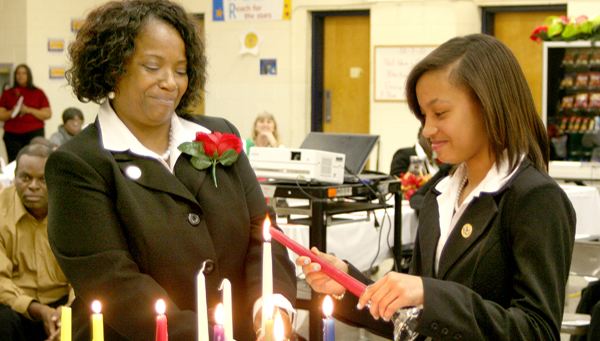 Monique Mann (right) lights the red candle symbolizing her installation as President of Hertford County Middle School’s Future Business Leaders of America as Advisor Brunet Parker looks on. Mann and 67 other students became the most recent class of FBLA during a ceremony on Dec. 9. Staff Photo by Amanda VanDerBroek

MURFREESBORO –Every journey has a starting point.

For 68 Hertford County Middle School students their journey to success began last Saturday as they were inducted into the Future Business Leaders of America (FBLA).

The mission of FBLA is to help build and sustain Business Education programs in order to serve communities, state and nation.

The Hertford County Middle School FBLA is advised by Brunet Parker, who has been there since the first chapter was installed in 2008 at the school.

The students their parents and relatives in attendance heard good wishes from school officials and elected leaders.

Noting his family connections in the area, Monger spoke about the tough times the older generation experienced, and the adversity they overcame.

“They were able to endure, sacrifice and persevere through it all,” he said. “I’ve gained strength through their struggle. …Their history keeps me grounded and it helps me to stay focused. It is our duty, both yours and mine, to make sure their efforts are not in vain.”

Monger also spoke about his time in high school and his life changing decision to go into the Marines, which led to his career in the Secret Service.

“I learned the best form of leadership is leadership by example, and it is possible for you to change those around you just by doing things you’re supposed to do,” he said. “I encourage you to set that kind of example.”

Monger said as a child he was told to never quit and to always press forward.

“Every time I had a fear it only kept me sharper; it only propelled me forward,” he said. He also spoke about how first impressions and how you dress can mean a lot to future employers and schools.

“People are evaluating you, how you present yourself,” he said. “Always remember there is a time and a place for everything. …Know your environment and know when to be sharp.”

Perry added that perseverance is even when your opponents are on your trail and they’re trying to get you, you have to keep on going.

“No matter what the judges say, you keep getting up and you keep moving,” he said.

Hertford County Board of Education member John Horton encouraged the students to get all they could from their experience with FBLA.

“I realize what they get from the leadership of this group is a valuable lesson that they will need to prepare them for this tough society which we live in,” he said. “I’m excited about the program because I know the value that is laid out for the young people.”

Jones said the students were lucky to have Parker to guide them and to have supportive parents.

“The world is in front of you and you can do whatever you want to do,” he said. “Always strive to be the best you can be and always treat people fairly and you will have no problems with life.”

Williams said even though the students are from a small county she never wanted to hear about them thinking small.

“Small county, big thoughts,” she said. “When thoughts come to your mind don’t dismiss as they’re nothing, because they are something.”

WINDSOR – Bertie County citizens who want to become involved in their local community will soon begin having more of... read more