Stolen van fished out of river 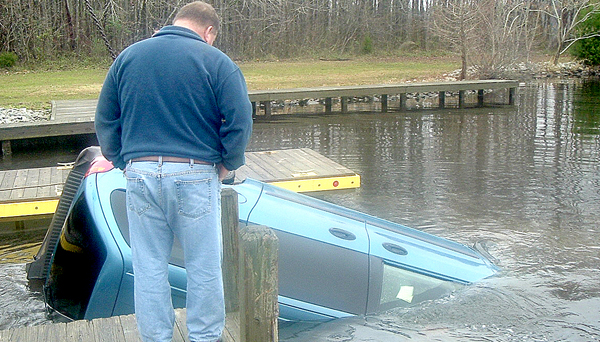 Gates County Sheriff Ed Webb watches as a van, reportedly stolen in Ahoskie on Saturday, is lifted out of the water at the Shoup’s Landing boat ramp on Sunday morning. Photo contributed by Kristen Broglin

WINTON – Two brothers heading out for a day of fishing stumbled across a “catch” they didn’t bargain for near here Sunday morning.

A van, reportedly stolen in Ahoskie on Saturday, was fished out of the Chowan River at Shoup’s Landing, according to information provided by Sgt. Brandon Hawks of the Gates County Sheriff’s Office.

Hawks said he was notified at 8:35 a.m. through Gates County Sheriff’s dispatch of a person identified as Chris Johnson of Ahoskie who had spotted a vehicle submerged in the water at the Shoup’s boat ramp.

Johnson told Hawks that he and his brother, Brian, had put their boat in the water and were in the process of leaving the landing area when they noticed a vehicle in the water approximately 100 feet from the ramp. Johnson reported that the top of the vehicle was about eight inches under water.

“We had received information concerning a vehicle stolen out of Ahoskie,” said Gates County Sheriff Ed Webb. “We contacted the Ahoskie Police to inform them of what we found here on our side of the river.”

Ahoskie Police Chief Troy Fitzhugh confirmed that a vehicle – a 2001 Ford Windstar van – was reported stolen Saturday at around 10:30 p.m. in the 200 block of North West Street.

“The owner advised had gone to visit a relative and left the van running, to keep it warm, while he went inside,” Fitzhugh said. “He discovered his vehicle missing about five minutes later and called our office to report the theft.”

Fitzhugh said his office put out a stolen vehicle report through the National Crime Information Center. Additionally, a BOLO (Be On the Look Out) was broadcast by law enforcement agencies in surrounding counties.

Webb said Lt. James Cannette of the Winton Fire Department, a diver, came to the scene, put on his gear and was able to attach a steel cable from the vehicle to a wrecker summoned to the scene.

“The wrecker was able to wench the vehicle up to the boat ramp, but Mr. Cannette said there was no way to get the van up and over the underwater lip right there at the base of the ramp,” Webb said.

“They drove the excavator here, hooked onto the cable attached to the van and were able to lift it out of the water,” Webb said. “We really appreciate the way they volunteered their efforts to assist us.”

Fitzhugh said the van has been secured by his department and that his officers are continuing to investigate the theft. 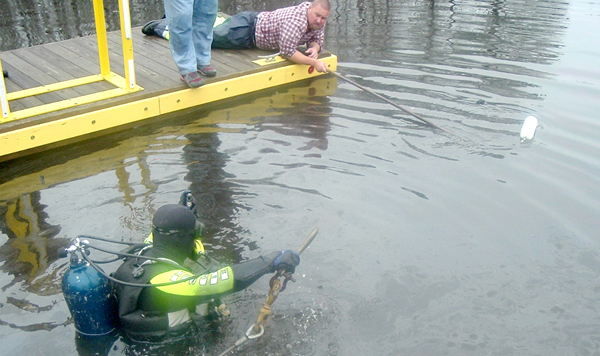 The happiest man in America is Phil Jackson. At 6′-8″ tall he is literally head and shoulders above everyone in... read more