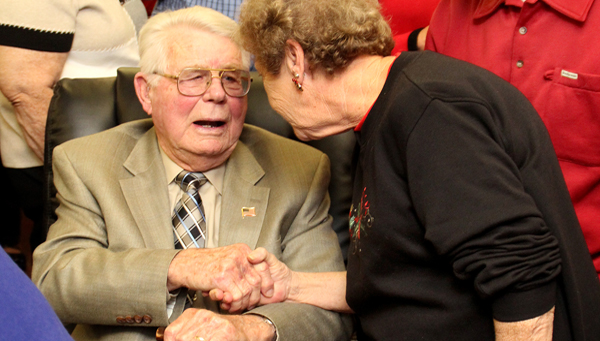 GATESVILLE – Through numerous roles acted out on the big screen, the now late Hollywood movie legend John Wayne was dubbed as the Great American Hero.

It’s evident that “The Duke” never met F.J. Outland Sr. Had that meeting took place, Mr. Wayne would have most assuredly handed over his title to the simple dirt farmer from the eastern end of Gates County.

In front of a standing room only crowd that packed the spacious courtroom of the Gates County Courthouse on Sunday afternoon, Outland was the center of attention. The stately gentleman, dressed in his “Sunday best” and joined by several family members, marveled at a photo and bronze plaque dedicated in honor of those brave men, Navy and Marines, who were part of the greatest naval disaster at sea, the sinking of the USS Indianapolis, during World War II.

Outland, age 19 at the time, was a Gunner’s Mate on the heavy cruiser. Of the 1,196 men onboard when two torpedoes from a Japanese submarine tore into the steel hull of the Indy shortly past midnight on July 30, 1945, only 317 survived, including Outland. And that came after nearly five grueling days, without basic supplies, spent floating in the shark invested waters of the Pacific before rescue craft arrived.

In perhaps the most touching moment of Sunday’s dedication, Outland’s son, Felton, read a poem penned by Bob Welch entitled, “Sleep well you men of the Indy’s crew.”

“This is quite a humbling experience for my family,” he stressed. “Speaking on behalf of my father, he would like to thank Earl Rountree for all his efforts to have this dedication. Thanks to all who supported him and to each of you for your attendance. Let us honor all veterans and never forget those who served this country.

“My dad accepts this honor on behalf of the survivors of the USS Indianapolis and to the shipmates that did not survive,” he added. “We, the survivors, would like to give all the honor and praise to our mates lost at sea.”

Mr. Outland, unable to stand for long periods of time without assistance, was visibly moved by the ceremony. On several occasions he could be seen wiping his eyes, his emotions worn on his sleeve as his mind wandered back to his time served on the Indianapolis and its place in military history.

“This thing has been on my mind for a long time, something to honor FJ Outland,” said Rountree. “My daddy told me about FJ Outland and the USS Indianapolis. For these many years, I’ve studied history; I’ve read the books; everything I could learn about the Indianapolis.”

Rountree told a story about the first time Jack Owens, now the Vice Chairman of the county’s Board of Commissioners, met Outland in 1984. Upon learning of Outland’s harrowing experience at sea and meeting the man, Owens commented that he felt he had just been introduced to John Wayne.

Calling men like Outland and others of his time as the Greatest Generation, Rountree told of the sacrifices made by all Americans of that era between 1941-45. He also touted the American heart of that time.

“We fought two wars on two fronts; we defeated two evil empires,” Rountree said. “Had it not been for heroes like FJ Outland, Cecil Taylor (a Gates County native that survived the attack on Pearl Harbor while serving with the U.S. Army) and others, we might be gathered here today speaking in Japanese or German.”

During its time at sea, the USS Indianapolis received 10 battle stars. Outland was onboard for eight of those military citations.

To show how significant the loss of life was on the Indianapolis, Rountree said there were only 307 American casualties during the famous Battle of Midway while 379 died in the Battle of the Coral Sea. Combined, neither came close to matching the deaths aboard the Indy.

“We have other veterans in our county that served during wartime; some of those brave men never made it back,” Rountree noted. “But the USS Indianapolis is a little bit different.”

Rountree said the link between the USS Indianapolis and the world’s first atomic bomb actually began at the bloody battle to occupy Okinawa. There, with Outland onboard and firing at attacking aircraft, the ship was damaged by a Kamikaze attack. It limped back to Mare Island (near San Francisco) for repairs. From there it became forever linked with history as President Truman had given the order to proceed with the U.S. plans to drop atomic bombs on Japan.

It was the Indianapolis that transported about half of the world’s supply of Uranium-235 at the time to an American air base on Tinian Island. There, the atomic bomb was assembled and later dropped on Hiroshima, thus bringing a hasty end to the war in the Pacific.

“The Indianapolis did its job, it went full throttle to deliver the material for that bomb, just one week before the submarine attack,” Rountree said. “From there it was to rejoin the fight in the Pacific. It was headed, unattended, to the Philippines, when it came under attack by Japanese subs. These men, those who died, those who survived, are our heroes.”

Taking part in Sunday’s ceremony was a detachment representing the US Navy (Naval Ship Support Activity unit), Troop 200 and Troop 202 of the Boy Scouts of America, Ginny Cowper (who sang the National Anthem) and an invocation by the Rev. Wayne Gardener.

Henry Jordan, Chairman of the Gates County Board of Commissioners, presented Outland with a framed copy of a resolution adopted by the board in October. That resolution, in part, is as follows:

“Be it resolved that the Board of Commissioners for the County of Gates hereby honors the sacrifice of those lost due to this terrible act and furthermore recognize the living legend and priceless treasure that is Mr. F.J. Outland Sr. As a mere token of appreciation and as a resolute mandate, we order that a rendering of the USS Indianapolis and a marker denoting the accomplishment of F.J. Outland Sr. be placed in a position of prominence in a County facility.

“May the people of this great County, State and Nation never forget the sacrifices made by the USS Indianapolis nor the value that F.J. Outland Sr. has made during his life to the freedom and security that we as American citizens possess.”

The event also recognized those in attendance who served in branches of the US military that either served during an act of war or peace.

Outland volunteered to serve his country by the time he graduated from Sunbury High School. He was sent to Great Lakes, Michigan for training and boarded the Indianapolis, stationed in San Diego, California, in October of 1943. He spent his Navy career aboard the Indianapolis, returning home where he farmed the rich, fertile soil that borders the Great Dismal Swamp.