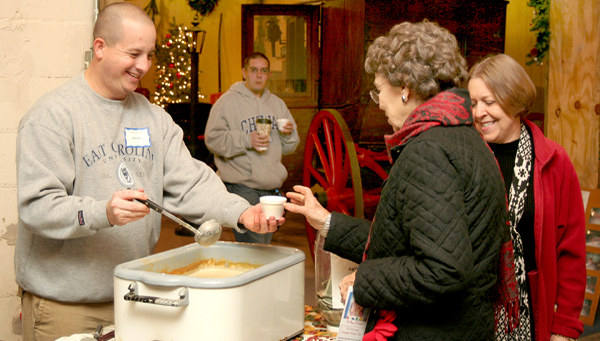 Jonathan Jones dishes up some of seafood bisque to hungry visitors at the Murfreesboro Agriculture/Transportation Museum. Staff Photo by Amanda VanDerBroek

MURFREESBORO – The Murfreesboro Historical Association’s Candlelight Christmas Tour has become a way for many near and far to kick off the holiday season.

The event brought in approximately 700 tour-goers.

According to MHA President John Woodard, the organization begins developing a theme and finds a local artist to create a painting or drawing to reflect the theme. This year’s tour theme was “Christmas Magic” and Twyla Duke of Chowan University created the accompanying artwork of a child looking out of a frosted window.

Woodard said the tour was nearly sold out the first night with seven buses bringing visitors from out-of-town.

“Four of those (buses) are out of Richmond, (Va.), which is very unusual,” Woodard said. “That’s been a tough market for us to break into and we tried different marketing this year and it really took off.”

The Candlelight Christmas Tour is known to draw in many from all over the area and surrounding regions.

Margaret Biggs of Roanoke Rapids, who came with a group of co-workers from the Interstate 95 Welcome Center, said she enjoyed her first Candlelight Tour.

“We love the history of North Carolina,” she said. “We talk about it everyday.”

Biggs said the history is what drew her initially to the tour.

“I love old things,” she said.

Trish and Steve Toney of Savannah, Ga. decided to take the tour while visiting relatives in Murfreesboro.

“I’ve read about it for years,” said Trish Toney. “The weather is nice and cold; it’s a good way to get the Christmas spirit.”

Woodard insists a good bit of advertising and word of mouth is the right formula to making the event so successful every year.

“It begins the Christmas season for so many,” he said.

ASKEWVILLE – The Bethel Assembly Christian Academy boy’s basketball team shook off their opening round loss and bounced back to... read more