GATESVILLE – The suspect wanted in the violent attack of a Hobbsville couple is under arrest.

Gates County Sheriff Ed Webb said that 24-year-old Justin James Cross voluntarily turned himself in Monday night. After being processed on the charges of two felony counts of assault with a deadly weapon with intent to kill, one felony count of armed robbery and one felony count of second degree kidnapping, Cross was placed in the Hertford County Jail in Winton under a combined $500,000 secured bond. 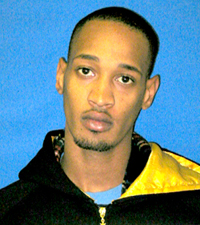 Webb said Cross was scheduled to have his first appearance in court within the next 72 hours.

Bryan Blanchard, 41, and his 39-year-old girlfriend, Shelby Lane, both of 420 Hobbsville Road, were injured in the Saturday morning attack.

Webb said his office received a 9-1-1 call at 4:26 a.m. Saturday in regards to the incident. GCSO Officer Garrett Winslow and Deputy Eric Wall were the first to arrive on the scene.

“They were advised that both victims had been struck with a carpenter’s hatchet and robbed,” Webb said. “The officers noted that the kitchen area of the home was in disarray, with a table and several chairs knocked over. There was blood splattered on the floor and around the sink. A blood trail led to the living room where Mr. Blanchard was found with a towel wrapped around his head.”

Webb reported that the victims, who both sought medical attention, were struck in the head, face and back.

According to information gained from the victims, a black male came to their door around 4 a.m. asking to use the telephone. Webb said Blanchard allowed the man inside because he knew him.

“The suspect then demanded money and when Mr. Blanchard told him he had no money the suspect produced a hatchet and began to assault Mr. Blanchard,” Webb said. “A struggle ensued. The girlfriend heard all the commotion and went to see what was going on at which time she was struck with the hatchet in the forehead by the suspect. She was also choked by the suspect.”

Webb said at some point, Lane was able to escape outside into a field. Meanwhile, Blanchard and the suspect continued to struggle, a fight that eventually took both men outside the residence.

“It was at that time that the female victim made her way back inside the residence where she called 9-1-1,” Webb said. “The suspect had left at that point.”

The Sheriff said as of Monday afternoon his office was flooded with calls regarding the case. Some of the calls, Webb said, came from as far away as Gloucester and Isle of Wight counties in Virginia.

“The suspect’s mother called and promised that she would have her son to turn himself in, which he did around 9:30 Monday night,” Webb stated.