WINDSOR – It was a vintage wedding as the vows of Amy Cheree Denton and Bryan Givens were solemnized on Friday, October 5, 2012 midst a quaint setting at Camp Windsor Tabernacle, on the Assemblies of God Camp Grounds in Windsor.

The bride is the daughter of Pastor and Mrs. “Buddy” Denton of Askewville. The groom is the son of Mr. and Mrs. Darryl Givens of Panama City, FL.

The bride was escorted by her father down the aisle of the semi outdoor auditorium. She was dressed in a white lace shoulder less gown draped at the hip with rhinestones and a full skirt. Her headdress was a jeweled headband. A floor length train fell from her long dark hair and overlaid the train of her gown. She wore short white fingerless wristlets and carried white daisies for her bouquet.

The groom wore brown slacks and vest with a white shirt and derby hat.

Maid of Honor, Chelle Denton of Springfield, MO, sister of the bride, and the seven bridesmaids wore short black ruffled chiffon dresses with black netted fingerless gloves and yellow spike heeled shoes. They carried yellow daises. Bridesmaids were Sarah Locke of Crystal City, TX and Jessica Stumbo of Panama City, FL, both sisters of the groom, Kellyn Brunson of Ocala, FL, Sheree Speer of Mobile, Ala., Kira Barker of Lynchburg, VA, Miriam Jonas of Vienna, Austria, and Maranda Hill of Askewville, all friends of the bride. Each of the attendants wore matching upsweep hairstyles.

Groomsmen wore brown slacks and vests with black shirts and derby hats. They were Trey Denton of Johnson City, TN, brother of the bride, Daniel Stumbo of Panama City, FL, brother in law of the groom, Patrick Hill of Cary, and James Royal, Josh Sherrel, and Beau Adams, all of Clewiston, FL, friends of the groom.

Ushering in the bride’s mother, Mrs. Cheryl Denton, and the bride’s grandmothers, Mrs. Mary Jepson and Mrs. Naomi Denton, was Chase Petry, cousin of the bride. Caleb Stumbo, nephew of the groom, ushered in the groom’s parents and the groom’s grandparents, Mr. and Mrs. David Hubbard and Mr. and Mrs. Jerry Givens.

Junior attendants were Daniel and Hannah Stumbo. Maddy Locke was the flower girl and rode down the aisle with brother, Zane, in a little red wagon. All are nieces and nephews of the groom. Hannah’s and Maddy’s dresses were made by the groom’s mother.

The platform carried old fashion décor with a Victorian couch and chair, an old dresser and, center stage in the back was the yellow dresser that once was in the bride’s bedroom. In the front center a chandelier hung near a white laced draped arch used for the ceremony. Other vintage décor included other antiques – to include old windows and doors around the outside of the historic tabernacle – the traditional wood shavings on the floor, and over 50 dried roses stored in bottles that the groom had given his bride during their courtship.

The ceremony was mostly non-traditional. It began with a worship song – “Be My Everything” – sung by four attendants: Chelle Denton, Trey Denton, Kellyn Brunson and Sheree Speer. The pianist was Jessica Vanderhoff, cousin of the bride from Portland, OR. She also served as the guest book attendant. There were videos of the lives and loves of Cheree and Bryan.

There were three sets of vows – the traditional vows, vows to their parents, and an extra set of personal vows that the couple placed in an old box with their pictures and a Bible that was nailed shut, to be opened on their first anniversary. This was followed by the bride and groom washing each others feet, using an old wooden tub, as a sign of humility and service. After the exchange of rings, both families came to the platform for prayer offered by the bride’s grandmother, Mrs. Naomi Denton.

Cheree then sang a love song that she had written to Bryan followed by the bride and groom sealing their marriage with a kiss before the new couple was introduced for the first time to the audience.

A reception immediately followed the ceremony in the rear of the tabernacle, which included the cake cutting, bride and groom games, food, cotton candy and a photo booth – attended by Tori and Savannah Petry of Summerfield, Fla., cousins of the bride – with props for pictures for guests to take.

The four-tier wedding cake consisted of both vanilla and chocolate, iced with white icing with a black swirl design and a yellow flower, topped with photos of the bride and groom. A chocolate groom’s cake for the fisherman groom read, “The Catch of my Life.”

There was a meat carving station of roast beef and turkey, a mashed potato bar, rolls and finger foods. Party favors with a thank-you message from the bride and groom consisted of sugar coated peanuts in small newspaper print brown bags tied in brown burlap type string and served from a wheelbarrow.

Mrs. Laura Hoggard and her daughter, Kelli Frazer, both of Askewville, served as the head hostesses for the reception.

The bride is a graduate of Bethel Assembly Christian Academy in Askewville and of Liberty University. The groom is a Navy veteran.

The couple enjoyed a honeymoon to the Bahamas and now reside in Mobile, Ala. 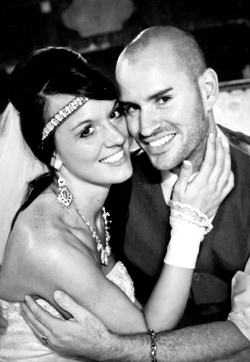