CONWAY – Rebecca Lynn Bryant and Jonathan Louis Martin were united in marriage during a 5 p.m. ceremony on June 16 at Conway Baptist Church in Conway.
The bride is the daughter of Mr. and Mrs. Harvey Thomas Bryant of Conway and the granddaughter of the late Mr. and Mrs. Roger William Martin of Conway and the late Mr. and Mrs. Hinton Rayford (Ray) Bryant of Murfreesboro.
The bridegroom is the son of Mr. and Mrs. Johnny Alvin Martin of Conway.  He is the grandson of Mr. Alton Louis Smith of Boykins, VA and the late Ruby Smith Smith and the late Mr. and Mrs. Roy Martin of Conway.
The Reverend Willie A. McLawhorn and the Reverend Suzanne Cobb performed the double-ring ceremony. Mrs. Pam Woodard, organist, and Mr. Lance Jenkins and Mrs. Terri Revelle, soloists, provided music.
The bride was given in marriage by her parents and escorted by her father.  The bride wore an Allure designer gown of shimmering diamond white organza and soft satin. The bodice of the gown featured a stunning one shoulder strap of Swarovski crystals, seed pearls and sequins and rouching flowing to a drop waistline.  The skirt of the gown was composed of flowing layers of organza.  An embellishment on the hip of the gown featured Swarovski crystals, seed pearls and sequins. Covered buttons and sequins adorned the back of the gown that flowed into a semi-cathedral train.

The bride’s handheld bouquet consisted of white calla lilies, green buttons, green carnations, and iris and peacock feathers wrapped with white ribbon. Intertwined in the bouquet were a brooch, necklace, ruby ring, and wedding band belonging to the bride and groom’s grandmothers.

The flower girls carried a floral pomander made of purple daisies.

Courtesies
A Lingerie Shower was given by Jennafer Bryant on March 10 at her home in Murfreesboro.
A Stock the Pantry shower was given at Courtland Baptist Church, Courtland, VA on April 1 and was given by Hillary Brock, Betsy Cutright and Renee Felts.
Friends of Bethany United Methodist Church hosted a miscellaneous bridal shower on April 29 at the Bethany Civic Center.
A Gift Card Dance was held May 4 at Valley Pine Country Club, Lasker, given by Conrad and Debby Babb, Joe and Ellen Barrett, Brian and Christy Bolton, LG and Juanita Britt, Bill and Kay Cooley, Phil and Betsy Davis, Michael and Melissa Decker, Floyd and Wanda Jenkins, Ms. Mary Jenkins, Jimmy and Angie Jilcott, Jimmy and April Liverman, Elbert and Marianna Long, Steve and Kitty Mann, Alvin and Linda Martin, Steve and Julie Martin, Tony and Ellie Martin, John and Nan McKellar, Bennett and Jeanette Peele, Danny and Anneke Revelle, Shane and Terri Revelle, Keith and Betty Ann Ricks, Lemuel and Shelby Ricks, Greg and Judy Taylor, Stacy and Patsy Taylor, Heath and Kelly Vann, Thomas and Debbie Vinson, Lee and Gail Wade, Jennings and Ann White, Jentry and Winnie White, Garrett and Marlo Williams and Jimmy and Phyllis Woodard.
A Bridal Luncheon was held May 5 at Southern Sisters Bakery-Eatery in Courtland, VA.  Hosts for the occasion were Rebecca Martin and Patricia Bryant.
On May 6, a Yard and Garden Party was held at the home of Steven and Lori Burgess and given by Adam and Wendy Burgess, Steven and Lori Burgess, Bryan and Calissa Carper and RL and Sharlene Smith.
A Bachelorette Weekend was held on the weekend of May 18, hosted by Dawn Kusy in Charlottesville, VA.
A Bachelor Weekend was held at the Lake Gaston Resort (The Club) on May 19 and May 20, hosted by Johnny Martin.
A Rehearsal dinner was held at the Fellowship Hall of Conway Baptist Church, hosted by the parents of the bridegroom on June 15.
A Night Before the Wedding Party was held June 15 at the home of Mr. & Mrs. Johnny Martin, Conway. 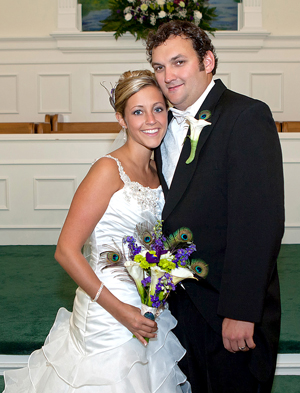