WINDSOR – Christin Amanda White of Windsor and Perry Deans Britton of Colerain were married in Ross Baptist Church on September 29. The Rev.Brian Medlin officiated the ceremony.

The bride was escorted by her father and given in marriage by her parents. The bride chose a dress by the designer, Oleg Cassini. The bride carried a bouquet of hydrangeas and roses accented with peacock feathers.

Miss Nicole White, sister of the bride of Windsor, served as maid of honor. She wore a plum colored one shoulder cocktail dress.

Allie Davenport and Rachel Davenport, cousins of the groom, served as program attendants. Wedding music on the piano was provided by Chris Bunch. Vocalist was Angela Walston.

Sharon Rose, aunt of the bride of Conway, served as mistress of ceremony.

A rehearsal dinner and dance was hosted by the groom’s mother with family and friends at The Historic Hope Plantation Heritage Center.

Following the wedding, a reception hosted by the bride’s parents, was held at Cashie Convention Center in Windsor.

Flowers and decorations for the wedding and reception were made and provided by the bride and her family.

After a honeymoon cruise to Caymen Islands and Cozumel, the couple will make their home in Farmville.

Pampered Chef Shower on April 26 was held in Greenville hosted by Alicia Bullock.

Bachelor Weekend on the weekend of June 1-3 was held in Myrtle Beach, SC, hosted by the groomsmen.

Bachelorette Weekend on the weekend of June 22-24 was held in Myrtle Beach, SC, hosted by Jessica Roberts.

Lingerie Shower on July 14 was held at the home of the bride’s parents, hosted by Brittany Whitehurst and Nicole White.

A Grilling and Stock the Shed Shower on July 21 was held at the home of the groom’s mother in Colerain, hosted by Matt and Jessica Roberts.

A Miscellaneous Bridal Shower on July 22 was held at the home of the bride’s parents, hosted by the family.

A Bridal Luncheon on September 22 was held at the home of Buck and Kathy Perry in Colerain hosted by Bonnie Britton, Delores Benthall, Winnie Matthews, Jill Perry, and Kathy Perry.

A Christmas Shower on December 1 will be held at the home of Holley Young in Windsor, hosted by Jill Perry and Holley Young. 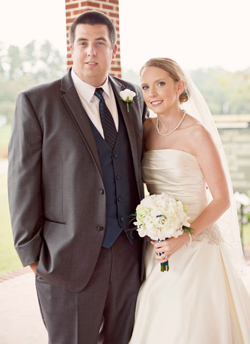 Mr. and Mrs. Bill Magette of Ahoskie announce the engagement of their daughter, Sarah Grace, to Alex Britton, son of... read more