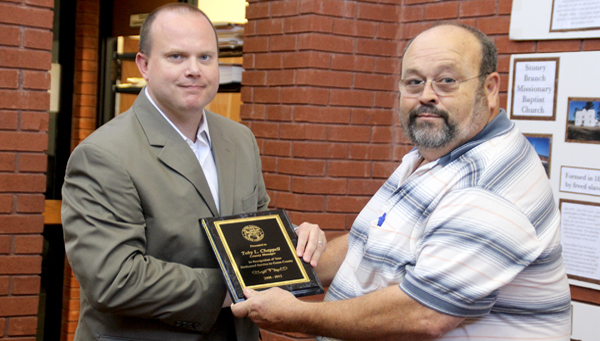 Toby Chappell (left) receives a plaque of appreciation for his four years of service as Gates County Manager from Graham Twine, chairman of the county’s Board of Commissioners. Staff Photo by Cal Bryant

GATESVILLE – Don’t let the tough exterior fool you, Tony Chappell does indeed have a heart and a piece of it broke here Friday morning.

Chappell’s voice crackled a bit at one point as he paused to reflect on his four-year stay in Gates County where he served the local government as its manager before accepting an offer to become the Greenwood County (SC) Manager.

His last day in Gatesville was on Friday and several county officials and staff were joined by those from the community to bid farewell to their boss, professional colleague and friend.

“Thank you for giving me a chance to be a part of this county,” Chappell said. “Thank you to (then board of commissioners) (the late) J.S. Pierce, Wade (Askew), Kenny (Jernigan), Carlton (Nickens) and Graham (Twine) for believing in me.

“Thanks also to the county staff,” Chappell continued. “I know a lot of times where I got the credit for things I didn’t do; what was accomplished had nothing to do with me, it had more to do with the staff.”

Chappell, a product of Vance County before spending the first part of his professional career with the Raleigh Police Department, said he has been proud to call Gates County as home over the past four years.

“I didn’t realize how much I learned about this county and its people until I was showing the new interim manager around last week and found myself sharing stories about the people and places here,” he said. “It was then that I realized just how much Gates County has become such an important part of my life. It’s those memories, special memories, that will last a lifetime.”

Twine, now the chairman of the county’s Board of Commissioners, said he and his colleagues at that time took a chance on Chappell, then a young administrator looking to prove his worth.

“Toby started his career as a county manager right here and it has worked well for Gates County,” Twine said. “Just look at his record for proof. We’re better off financially and more stable than we’ve been in a long time.

“I am proud of the progress he made in a manager’s role,” Twine continued. “He is leaving with respect from across the state, from representatives, senators; people across the state know his name because he has worked with them. Toby worked hard for Gates County and we are proud to have had him as part of our county; I’m sorry to see him leave but wish him well in his new job.”

Also on hand to bid farewell to Chappell was Betty Jo Shepheard, a member of U.S. Senator Richard Burr’s staff. She read a letter from Burr and also presented Chappell with a flag that has flown over the U.S. Capitol….“in honor of your service and commitment to the citizens of Gates County and northeastern North Carolina,” Shepheard said.

In his letter, Burr praised Chappell for his service to the county and state.

“You have worked tirelessly to improve the county economically while still maintaining a great quality of life for its citizens,” Burr stated in his letter to Chappell. “Your commitment to the northeastern area of our state has been recognized throughout North Carolina. You have met the challenges head on. You have impacted lives and I know that the county will continue to thrive under the elected leadership and the incoming manager. You have done an outstanding job in positioning Gates County for a prosperous future. Please know that I feel South Carolina’s gain is certainly North Carolina’s loss. Please keep in touch and feel free to call on your North Carolina Senator at any time.”

“As commissioners we have to make a lot of decisions,” Jordan noted. “We have to sign off on things before they become official, but I’m here to tell you that Toby does a lot of legwork for us, giving us the information we need to help make our decisions. He has a great work ethic and that will take him a long way in life. He leaves a tough seat to fill.”

Joe Greene, a member of the Gates County Planning Board, said his first assessment of Chappell has proven true over the four-year period.

“He has a backbone; he will stand up for himself,” Greene said. “He showed leadership and guided us in a way we’ve never been guided before. The most important thing is that Toby is more than a county manager, he’s our friend. I’ll never forget him and I wish him and his family the very best for a bright future.”

Gates County Cooperative Extension Director Reba Green-Holley said despite a few professional battles with Chappell, she stressed that those within local government in Gates County bonded well under his leadership and became a team.

“Toby is very competitive, but I enjoyed his professionalism and his friendship,” she said.

Chappell’s administrative assistant, Diane Hendrix, said he has provided Gates County with a “stabilizing force” during his time here.

“We’ve had some trials and tribulations, but Toby was there, working hard to get through them and we’re much better off as a county,” she said.

Ann Askew praised Chappell for immediately joining with county citizens upon his arrival to help in the fight against the U.S. Navy’s plans to build an outlying landing field (practice facility) in the county, robbing it of precious land that had been owned for generations by local families.

“Yes, we took a chance on hiring Toby, but that chance paid off,” said Wade Askew. “Not only did he turn out to be a great county manager, but a great friend as well. You will be missed.”

Patrice Lassiter, Director of the Gates County Inter-Regional Transportation System, stated that she had worked with several county managers over the course of her career, but only Chappell allowed her to make and stick with the policies of which her department operates.

“It’s easy to go out and do a job when the policy is in black and white and not being changed,” Lassiter said. “I knew my boss was going to stand behind me and back me up and I thank him for that.”

Another new leader in Gates County, Schools Superintendent Dr. Barry Williams, stopped by between assignments to deliver a farewell gift to Chappell.

“Gates County Schools really appreciate what you and the commissioners have done and continue to do for the children of this county,” Williams said. “Good luck with your new career; you’ll be missed.”

Chappell resigned Sept. 26 during an emergency meeting of the commissioners, one day after accepting the county manager’s job in Greenwood County. At that meeting, the commissioners voted to hold Chappell to the 45-day resignation notice clause in his contract, meaning his last day was Nov. 9.

The commissioners have hired Kenneth W. Windley Jr. to serve in an interim role while they conduct a search for a full-time manager. Windley, a 60-year-old native of Carteret County, has served 35 years in city/county government, the most recent was the manager of Robeson County from where he retired in 2010. He began his interim duties in Gates County on Nov. 1.