A program of wedding music was provided by Jacob Overton, soloist and guitarist, Hayleigh Stallings, who sang a duet with Jacob Overton, and Daniel Dunlow, pianist, all of Roanoke Rapids.

Given in marriage by her parents, the bride wore an ivory satin strapless pick-up ball gown with a sweetheart bodice, beaded lace detail throughout the gown and chapel-length train.

The bride is a 2012 graduate of East Carolina University with a Bachelor of Science in elementary education. She is employed with Hertford County Schools as a math/science teacher.

After a honeymoon in Ocho Rios, Jamaica, the couple will reside in Sunbury.

A reception was held following the ceremony, hosted by the bride’s parents, at the home of Mason and Lauren Price and catered by family and friends. Music was provided by Tim Bratton of Roanoke Rapids.

An after-rehearsal dinner was hosted by the bridegroom’s parents at Calvary Baptist Church and catered by david’s Restaurant of Roanoke Rapids.

On Sept. 29, a bridal luncheon was held at Rosemont Vineyards and Winery in LaCrosse, Va., given by Debra Pittman, Iris Kinnin and Tina Powell, all aunts of the bride, and Velna Hux, cousin of the bride.

A bridal shower was held on Aug. 26, given by church friends of First Christian Church.

On Sept. 16, a bridal shower was held at Smith United Methodist Church, given by friends and family.

Friends and family hosted a bridal shower on Sept. 23, at Beulah Baptist Church in Sunbury.

A bachelorette weekend was held Aug. 10-12 at Pinehurst, hosted by the bridesmaids. 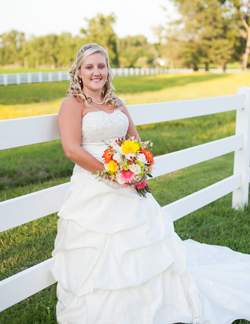