FRANKLIN, VA – Police officials here are searching for a suspect involved in a Thursday night murder that may have made his way into northeastern North Carolina.

According to Franklin (VA) Police Lt. T. W. Whitt, arrest warrants are currently on file for 25-year-old Sol Damacus Burke, aka “Dukey.” He is described as a black male, standing 6’ 4” tall and weighing 230 pounds. He has a tattoo of “Dukey” on his right forearm and bicep. 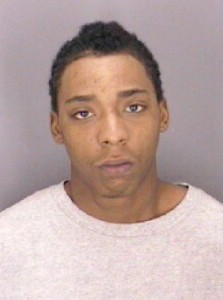 Even though Burke lists a last known address of 1215 Blythewood Lane in Suffolk,VA, Lt. Whitt told the News-Herald on Friday that the suspect may be hiding out here in the Roanoke-Chowan area.

Burke, who is considered armed and dangerous, may be in a 2004 red Dodge Durango with Virginia tag XDL-9247.

Answering a shots fired call, Whitt said Franklin Police officers responded to the 300 block of Pearl Street at approximately 8:30 p.m. on Thursday. Upon arrival they found 30-year-old Eric Dewayne Smith who had a gunshot wound to his lower torso. The victim was transported by air ambulance to Sentara Norfolk General Hospital where he succumbed to his wound while being treated.

Anyone with information as to the location of Burke should call the Franklin Police Department at 757-562-8575, Detective Corporal J. Butts at 757-562-2849 or Franklin Crime Solvers at 757-562-8599. Information that leads to an arrest can earn the caller a cash reward while remaining anonymous.

AHOSKIE – Cutbacks at the federal level are trickling down locally. According to a press release sent to the Roanoke-Chowan... read more