‘Bras for a Cause’

MURFREESBORO – The Hertford-Gates County Relay for Life Committee held their annual “Bras for a Cause” event on Thursday, October 25. Local participants were asked to decorate bras to bring attention to the importance of breast cancer awareness. The event was held in October in honor of Breast Cancer Awareness Month. 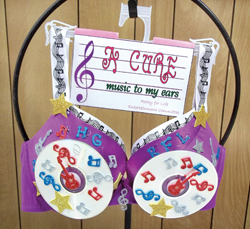 This entry - "A Cure is Music to My Ears" – was created by the Relay for Life Entertainment Committee.

Bras were on display in the front room at Metal Tech of Murfreesboro. A great crowd turned out to vote for their favorite bras. There were 29 entries from 27 participants. Each bra was labeled with a number and located near a cup with the same number. People were asked to ‘vote’ for their favorite bra by placing a donation of any amount in the corresponding cup. At the end of the night, the winner would be the participant who raised the most money through their entry. All money raised during the event was donated to the American Cancer Society under the names of the participants.

The event took place before the monthly team captain meeting and winners were announced close to the end of the meeting.

There were many creative entries to pick from. Some chose to artfully decorate their bras while others delighted in a turn-of-phrase. The first place winner was Rochelle Harrell for her “Shine a Light on Cancer” bra that included jewels and lights. Second place was a team effort by the Relay for Life Entertainment Committee titled “A Cure is Music to My Ears.” There was a tie for third place between Sandy Brock and Jackie Brinkley. Brock created a piece titled “Fighting the War to Save The Racks” that included pink camouflage and army soldiers. Brinkley titled his work “Don’t Be a Dum Dum, Do Self Exams” and included Dum Dum lollipops and hand prints in his decoration. 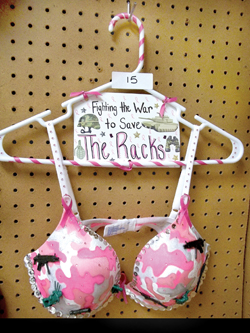 Sandy Brock entered this creation – entitled, "War of The Racks.”

Over $450 was raised through voting during the Bras for a Cause event. If you missed the event but would like to see the bras, they will be on display during the 2013 Relay for Life Event at Chowan University on April 26-27.

During the monthly meeting the public was invited to many upcoming events. The Cancer Prevention Study #3 will begin in December this year. The study is held by the American Cancer Society and is the third of its kind. Through this study, ACS hopes to find out why certain people are more likely to get cancer than others.

If you are between the ages of 30 and 65 and have never had any form of cancer you are eligible for the study. If you would like to volunteer for the study, the initial session will be held on Saturday, Dec. 8 from 9 a.m. until 12:30 p.m. at Metal Tech of Murfreesboro. A survey, blood sample, and body measurements will be taken during the first session. All of this information will be stored for future reference. The participant will be asked to complete a survey every 2 to 5 years as follow up. Please schedule your appointment in advance by visiting www.CPS3NortheastNC.org. Your visit should last 20-30 minutes.

The Relay for Life Fundraising Extravaganza will be held on Nov. 29 from 6-9 p.m. at Metal Tech of Murfreesboro. Teams and local businesses will be selling everything from baked goods to gift baskets. Come get your holiday shopping done early and contribute to a good cause! Dinner will also be sold. There will be a BINGO game during the event that will include prizes to winners.

If you would like to sell items at the event and donate a portion of the proceeds to Relay for Life, contact Angie Plaunty at aplaunty@ncrrbiz.com as soon as possible. Flyers will be posted around town before the Extravaganza to advertise goods available for purchase.

Relay for Life will have a float at all local parades this year. If you would like to assist with the float please contact Jackie Brinkley at jackie.anne@embarqmail.com.

The next Hertford-Gates Relay for Life meeting will be held at 6:30 p.m. on Jan. 24 at Metal Tech of Murfreesboro.

If you have any suggestions on how to make the 2013 Relay the best yet, contact Angie Plaunty at aplaunty@ncrrbiz.com or Jackie Brinkley at jackie.anne@embarqmail.com