MANTEO – Jessica Lynn Storey of Murfreesboro and Evan Lee Taylor of Kinston were married during an outdoor ceremony in the Elizabethan Gardens in Manteo, NC on September 8, 2012 at 5:30 in the evening. The Reverend Robbie Parker officiated.

The bride was escorted by her father and was given in marriage by her parents. The bride chose a dress from Pure English Couture Bridal in Virginia Beach, VA. She wore a beautiful Edimburgo gown from the San Patrick Collection by Pronovias. The mermaid style gown featured a ruched Sienna Organza bodice with elegant layers criss crossing the bodice and waist. The skirt featured a series of extensively fluttered fabric ruffles with a slight train in back. A beautiful pearl and crystal belt from Marisa bridals was a stunning compliment to her gown and the veil by Toni Federici and headpiece from J. Piccone finished her look off to perfection. The bride carried a hand tied bouquet of orange and white roses, green hydrangeas, orange spray roses, green hypericum berries, white stock and seeded eucalyptus wrapped with white satin and embellished with a starfish brooch.

Mrs. Allison Storey Hollowell, sister of the bride of Greenville, served as matron of honor. Bridesmaids were Ms. Sara Rachel Felts, cousin of the bride, of Branchville, VA, Ms. Anna Marie Parker, friend of the bride, of Roxobel and Ms. Kelsey Rae Taylor, sister of the groom of Kinston. The bridesmaids wore navy silk taffeta cocktail length dresses by WTOO. The bridesmaids carried hand tied bouquets of orange and white roses, white hydrangeas and white stock wrapped in white satin and embellished with orange ribbon and a starfish brooch.

The groomsmen, friends of the groom, were Mr. Joshua Alexander Maness of Kinston, Mr. John Ivey Alston of Kinston, and Mr. Billy Justin Hill of Kinston. Ushers were Mr. Charles Frederick Evans, uncle of the groom, of Kill Devil Hills and Mr. Daniel Lee Hollowell, brother in law of the bride, of Greenville.

Following the outdoor wedding, a reception hosted by the bride’s parents, was held at 108 Budleigh in Manteo. Greeting the guests were Mrs. Malinda Pearce Parker and Mr. Scott Thomas Parker. Music was provided by DJ Andy Lawrenson of Kill Devil Hills. Guests enjoyed a buffet with a variety of meats and seafood catered by Ortega’z.

Flowers and decorations set the mood for a beautiful garden wedding and reception prepared by Clay Rawls of Added Touch Florist of Ahoskie.

The buttercream frosted, four layer wedding cake, adorned with seashells, coral and starfish was homemade by Mr. and Mrs. Larry Joyner of Ahoskie. Cake servers were Mrs. Patsy Storey Marriner, aunt of the bride and Mrs. Stacy Evans Morris, aunt of the groom.

A rehearsal dinner hosted by the groom’s parents was held at Kelly’s Seafood Restaurant in Nags Head.

The bride is a 2009 graduate of Chowan University with a Bachelor of Science in Graphic Communications. She is currently employed with the Kinston Free Press as an Inside Sales Representative. The groom attended Mt. Olive College and is a 2006 graduate of Lenoir Community College. He is currently employed with the North Carolina Department of Agriculture at Caswell Research Farms as a Research Specialist.

After a honeymoon to Charleston, SC, the couple will make their home in Kinston with their black lab, Belle.

A Bridal Shower on June 9, 2012 was held at the Hertford Academy in Murfreesboro, hosted by Allison Hollowell and Anna Parker.

A Lawn and Garden Cookout on July 21, 2012 was held at the home of the bride’s parents, hosted by Chip, Linda, Sara and Reed Felts.

A Girls Weekend and Lingerie Shower on August 4, 2012 was held at the home of the bride’s sister, hosted by Allison Hollowell.

A Miscellaneous Wedding Shower on August 5, 2012 was held at Faith Fellowship Church in Kinston, hosted by Margaret Spaugh, Michael Broadway and Beth Maness.

A Linen Shower on August 18, 2012 was held at Our Picnic Basket in Kinston, hosted by the groom’s mother and sister, Kim and Kelsey Taylor.

A Bridal Luncheon on August 25, 2012 was held at The Commons in Murfreesboro, hosted by Pansy Storey, Patsy Marriner and Melanie Storey. 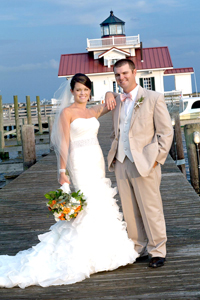