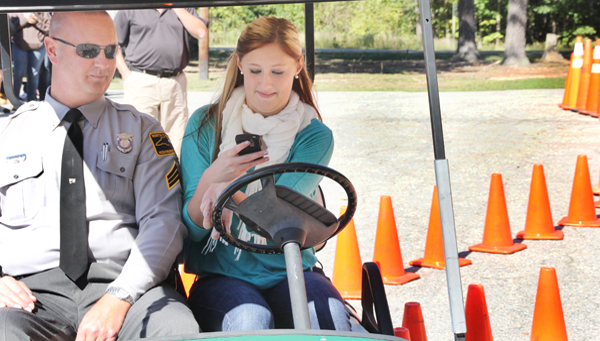 Gates County High School student Addison Cochran, accompanied by Highway Patrol Sgt. Mike Warren, takes her eyes off the task of driving a golf cart as she responds to a text message sent by another student. This was part of a “Wait to Text” campaign held at the school last week. Staff Photo by Cal Bryant

GATESVILLE – An effort by several local agencies is aimed at making sure Gates County teens have a chance to grow old.

“The Gates County Child Protection Team annually identifies an issue that is or could become a safety concern to children in Gates County,” said Geoffrey Marett, Director of the Gates County Department of Social Services. “This year we identified the dangers of texting while driving as an important issue in our community where awareness needed be brought to the attention of county residents.”

Team members set-up a display just outside the GCHS cafeteria on Oct. 10 where students were encouraged to sign a pledge stating they would not text and drive. Once the pledge was signed they were given a card that gave statistics and facts on how texting impacted driving. The students also received thumb bands a reminder not to text while driving. Also on display was a board with information and a slide show.

Of the 520 students at school on that date, 397 signed the pledge and promised not to text while operating a motor vehicle. The class-by-class breakdown of those signees were 111 freshmen, 101 sophomores, 86 juniors and 99 seniors.

“Seventy six percent of the student body took the pledge,  that’s three out of every four students, which we see as an outstanding result,” Marett stressed.

Concerning that pledge to refrain from texting while driving, Rashawn Gatling, a 15-year-old sophomore, remarked, “It makes you safer and it ensures your eyes are on the road.”

“It is important in order to cut down on accidents,” said 15-year-old sophomore Paul Gary.

Nichole Gardner, a 14-year-old freshman, said, “You never know what can happen while you are looking down at your phone.”

For 14-year-old freshman Laurel Dunagan, the pledge reminded her of a dark day in her life.

“I had a friend die due to an accident when they were texting. You have your whole life to live, why waste it on just one text,” she said.

Evan Winn, a 16-year-old junior, noted, “I have a long life to live and text messages can wait until it’s safe.”

“Life is too important to lose it over a simple text.  Whatever someone has to tell you can definitely wait,” stated 17-year-old senior Allyson Owens.

On Thursday the students followed up their written pledge with the live demonstration. There, a course was laid out, using cones, for the students to navigate a golf cart while responding to a text message. As expected, the cones took a beating.

“Imagine that cone was a vehicle, the ditch or a tree that you struck while not paying attention to your driving,” said NCHP Sgt. Mike Warren who was joined by his colleague, Trooper Glenn Bunch, at the demonstration.

Warren said the demonstration compliments the pledge effort from Wednesday.

“This just gives the students a small slice of reality of how texting affects their skills as a driver,” Warren said. “No, this isn’t a 1,000-pound vehicle traveling at 55 mph; it’s a golf cart going 10 mph or less in a controlled environment. But the end result, the message we’re trying to send is the same….texting while driving is something they shouldn’t be doing; adults shouldn’t be doing it either, because it’s very dangerous.”

Now, with advances in technology, Warren noted that cell phones have evolved into handheld computers, offering even more features.

“They’ve got to the point where they’re no longer used to just talk on and text on, but are capable of video, still photography, web surfing and updating your Facebook page,” he said. “Those features add further distraction if a driver chooses to use them while operating a motor vehicle, especially for an inexperienced driver. This program we’re doing here today will hopefully remind students of the dangers of distracted driving.

“In our line of work, the worst thing we deal with is vehicle accidents, especially head-on accidents and overturned vehicles,” he continued. “What makes those even worse to deal with is to have to investigate an accident involving young people who have made a bad choice by choosing to pay more attention to a cell phone or smart phone than they do to the road. Please, don’t text and drive. It’s extremely dangerous and it’s against the law…..if caught the driver faces heavy fines, but the real bottom line is that we don’t want to see anyone get hurt.”

The team meets quarterly at noon in the Conference room of the Gates County Department of Social Services building. The first meeting for 2013 is scheduled for Jan. 20.

On behalf of the team, Marett said he wanted to thank Miller Funeral Home for printing and donating the pledge cards signed by the students.