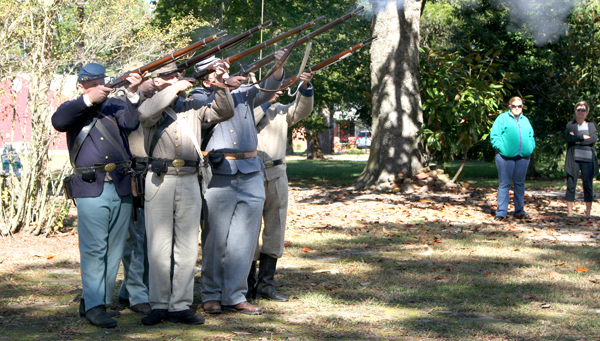 On Saturday and Sunday, the Murfreesboro Historical Association’s Sesquicentennial Commemoration of the Civil War continued with reenactments, encampments of both Union and Confederate armies, lectures, and museum artifacts.

In 1861, the “War Between the States” began after the secession of the Confederate States. The bloody four year war took the lives of more than 600,000 and is still considered one of the most deadly wars in U.S. history.

During Murfreesboro’s 150th commemoration, visitors relived the moment when the town was spared being burned by Union troops, a fate neighboring Winton experienced during General Sherman’s March.

Re-enactors from both sides gathered at the steps of the Melrose home on Broad Street where Union soldiers reportedly vowed to spare Murfreesboro from the torch after learning a Freemason lived there.

Cannon firing, infantry drills, a ladies’ fashion show (dubbed Victorian Secret), book signings by area authors and a period church service were just a few events on tap. The museums located in the Historic District were also open to visitors.

Jody Grizzard of Murfreesboro brought his three-year-old granddaughter to see the sights and sounds of Civil War history.

Grizzard, a native of the town, grew up knowing of Murfreesboro’s history and wanted to share it with his granddaughter.

“It’s amazing people make the effort to relive history,” he said. “History is what we learn from our mistakes.”