A program of wedding music was performed by organist Nicda Patterson of Annapolis and soloist Cathryn Caldwell of Los Angeles, Ca. The church decorations were of sunflowers and white hydrangeas.

The bride, escorted by her father, chose a strapless gown of ivory cotton silk faille, fit and flare with a spiral slot seam, sweetheart neckline and covered buttons down the back. She wore a one-tier fingertip veil accented with satin piping, and carried a bouquet of sunflowers and white hydrangea.

Mrs. Christopher Andrews of Annapolis was mistress of ceremony.

Following the ceremony, a reception was held at the Annapolis Maritime Museum decorated with a  nautical theme.

Music was provided by the Rollex Band from Washington, D.C. The two-tier cake and cupcakes were decorated with

nautical symbols. A center board was signed with best wishes to the couple by guests.

An after-rehearsal dinner, hosted by Denis and Laure Seynhaeve, was held at the home of Scott and Beverly Burge in Annapolis, MD. Dinner was served around the pool, followed by dancing and live music.

Engagement party hosted by Conley and Robin Hilliard and Eloise Ward at the Hilliards’ home in Raleigh with live music by the Crush Band.

The bride earned a B.A. from Peace College, Raleigh, and a M.Ed. from University of Maryland. She is employed as a teacher at Banneker Middle School.

The groom received a B.A. at Boston College and worked for Charles Schwab in Washington, DC and is beginning the MBA program at the University of Maryland.

After a wedding trip to Paris and Province and the Island of Rhodes, Greece, the couple is residing in Annapolis, Maryland. 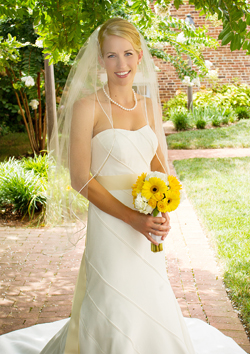