Allen and Penny Phillips of Dunn announce the upcoming marriage of their daughter, Ashley Paige Phillips, to Charles Jesse Cobb, son of Charles and Joan Cobb of Windsor.  The bride elect is the granddaughter of the late Mr. and Mrs. Garland Phillips, Mr. John Roy Roberts and Mrs. Doris Butler Bishop.  She is a graduate of East Carolina University with a Bachelors of Science in Nursing and a minor in Child Development and Family Relations.  The perspective groom is the grandson of Mr. and Mrs. Marvin Cobb, the late Mrs. Hilda Cobb, and the late Mr. and Mrs. Jesse Forrest Hughes.  He is a graduate of Pitt Community College with an Associate’s degree in Applied Science in Air Conditioning, Heating & Refrigeration Technology.  A private wedding will take place on October 19 at Honeysuckle Hills in Pigeon Forge, TN.  A wedding reception will follow on November 3 at the Washington Civic Center in Washington, NC.  The couple will reside in Winterville. 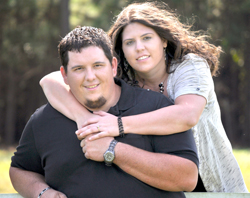