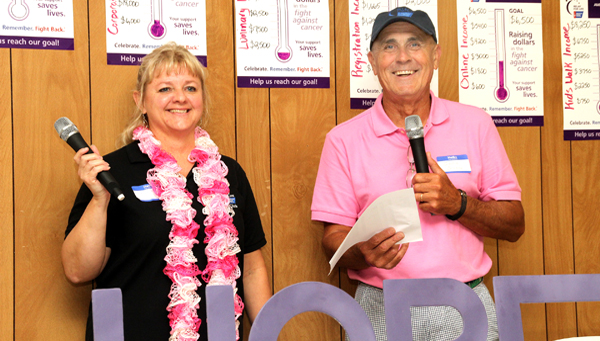 Angie Plaunty and Jackie Brinkley were formally introduced last week as the co-chairs of the 2013 Hertford-Gates Relay for Life. The event will be held April 26-27 at Chowan University. Staff Photo by Cal Bryant

Now entering its 13th year, those involved in Hertford-Gates Relay for Life are still hungry to seek an end-all cure for cancer and that fact was extremely evident by a lively crowd attending the traditional kick-off for a new year on Thursday night at Metal Tech.

There, Rochelle Harrell and Leigh Nowell were praised for their efforts as co-chairs of the event for the past two years. They took their bows and turned the reigns over to incoming co-chairs Jackie Brinkley and Angie Plaunty.

“First of all we need to thank Rochelle and Leigh for the wonderful job they did for the past couple of years,” Brinkley stated. “Now as a new year begins you need to know this is not the Angie and Jackie show, this is about you guys and the hard work that you do and all those team members.”

Brinkley said it was evident why those involved in Relay have such a deep passion for the event.

“We know why we’re here, it’s because we’re concerned and care about people that have cancer or have had cancer,” he stressed. “I choose to Relay because my father and father-in-law died from lung cancer; because my wife survived breast cancer; because I survived cancer.

“My first experience with cancer was 20 years ago when a little bitty baby in our church was born with cancer,” he continued. “One night the pastor and deacons went and prayed over that baby. Now, 20 years later, that little baby is sitting back there in our audience. In that 20 years new treatments, new technology has been found and used to save lives. Money raised through Relay for Life events like ours funds the research behind developing these new treatments.  Make it personal; make it your fight to help find a cure for cancer. Keep fighting the fight.”

Brinkley challenged those involved in Relay for Life to become involved in a simple fundraising opportunity. He said that most everyone spends at minimum $1 per day purchasing a soft drink or bottle of water. Based on the fact that 714 team members took part in the 2012 Relay coupled with the fact that there are 210 days between now and the 2013 event (set for April 26-27 at Chowan University), if each team member opted to save $1 per day that would produce $149,940 to help meet next year’s goal.

“All of us can do that,” Brinkley said. “That’s simple…one dollar a day, seven dollars a week and we’ll blow next year’s fundraising goal out of the water.”

“I know you’ve heard this over and over again, but Relay is family; we here are family,” said Plaunty. “When times are tough, you turn to family and that’s exactly why we Relay each year. We work hard to find a cure for cancer, but like a big family we all have fun doing it. All the hard work is worth the effort.”

Also taking part in the 2013 Relay kick-off was longtime supporter Ray Felton, the owner of Metal Tech. Felton serves as a member of the North Carolina Task Force, a liaison between the American Cancer Society and volunteers.

“Relay is a team sport, we’re all in this together,” Felton said. “Relay isn’t judged by dollars and cents, it’s judged by the lives that are touched. We’re touching lives every day and putting smiles on the faces that need them….that’s the measure of success. Never forget that you are important to this cause.”

Plaunty introduced Crystal Herring of the American Cancer Society, who will serve as the ACS staff partner for the Hertford-Gates event. While new to ACS, she is a veteran worker of non-profit organizations. She also has been personally affected by cancer, losing both her parents to the disease.

“Relay is the best experience of my life,” she said. “Thank you for all you do here in Hertford-Gates. You guys do a phenomenal job up here.”

Plaunty also unveiled the goals for the 2013 Hertford-Gates Relay for Life. Topping that list is $228,700 in fundraising as well as 43 teams and 715 team participants. She announced that $6,000 of the total goal has already been raised. Another $5,000 was donated on Thursday night.

She and Brinkley introduced the members of the 2013 Planning Committee.

“Ya’ll keep doing what you’re doing and we’ll have the best Relay ever,” Brinkley said to those representing the several different committees.

The next meeting of Relay Planning Committee is set for 6 p.m. on Oct. 25 at Metal Tech. That event is also open to teams wishing to register, beginning at 7 p.m. Those registering at that meeting are eligible to waive the normal $10 fee.

There is also a fundraising extravaganza scheduled for 6-9 p.m. on Nov. 29 at Metal Tech. Those wishing to take part in that event are urged to contact any member of the Relay Planning Committee for more information.

Harrell and Nowell began the evening by passing out certificates for those sponsoring the 2012 event, one that raised $225,470. They also honored Claire Place – the Kid’s Walk Art Contest winner whose award-winning image was used on the 2012 Kid’s Walk t-shirt.

Also recognized were members of the Relay Grand Club, individuals who raised $1,000 or more in a one-year period. Additionally the members of the 2012 Relay Planning Committee were honored for their hard work.

Fundraising award team winners for 2012 were:

(2) Women’s Division of the Murfreesboro Chamber of Commerce;

WINTON – After a long and sometimes frustrating wait, residents of a tiny Hertford County community nestled on the banks... read more