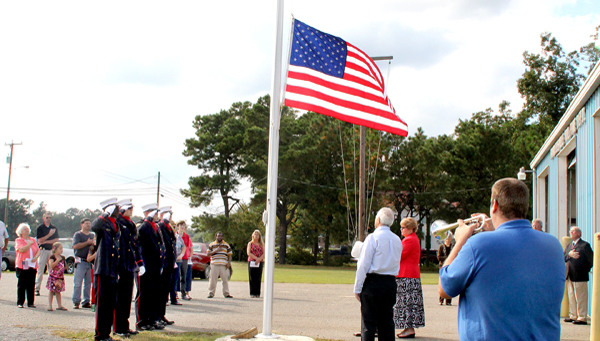 Chris Jernigan (right) performs “Taps” while members of the Hertford County Firefighters Association Honor Guard join others in a salute of a new flag raised Sunday at the Harrellsville Volunteer Fire Department. The event was staged by Woodmen of the World Lodge 328 of Ahoskie. Staff Photo by Cal Bryant

HARRELLSVILLE – It’s never too early or late to recall the tragic events that unfolded on Sept. 11, 2001. As a matter of fact, all Americans should reflect daily on the lessons learned from that dark day in history.

A small gathering of patriots did remember that day here this past Sunday, Sept. 30, where an American flag, pole and plaque were dedicated in front of the Harrellsville Volunteer Fire Department. The event was the work of Woodmen of the World Lodge 328 of Ahoskie.

“We accept this flag from Woodmen of the World,” said Harrellsville Mayor Robert Dantz. “This organization is one of the largest fraternal benefit societies in the world, totaling 845,000 members. They belong to lodges throughout the United States and conduct fraternal projects that benefit individuals and communities, just like they’re doing here today with their donation of this flag and flagpole. They’re a great organization.”

Eleanor Hollowell, Woodmen of the World Field Representative, summoned members of Lodge 328 to the podium to make the official presentation of the flag.

“Since 2002, Woodmen of the World lodges across the country have been presenting and dedicating flags and flagpoles, not only to honor the heroes and those that lost their lives in the 9-11 crisis, but also to those who are serving us now, our members of America’s Armed Forces,” Hollowell said. “We also have a lot of daily heroes right here in our local communities – police officers, firefighters, emergency rescue personnel and other first responders who risk their lives to keep us all safe.”

Hollowell mentioned that since 2002, Woodmen of the World lodges have dedicated nearly 5,000 flags and poles.

“We can think of no more special way to honor our brave men and women on call for us every day of the week, every week of the year than by the sight of the American flag flying proudly,” she said. “Patriotism is at the very core of Woodmen of the World. We honor those that keep us safe and keep us free.

“It’s fitting that we dedicate this flag and flagpole today as it’s our nation’s flag atop the pole that serves as a symbol of the enduring spirit of all Americans,” Hollowell added.

The inscription on a plaque at the base of the flagpole at the Harrellsville Volunteer Fire Department appropriately reads, “In Honor and Remembrance of the heroes and victims in the fight against terrorism and to celebrate the enduring spirit of all Americans.”

Members of the Hertford County Firefighters Association Honor Guard performed the task of raising the flag on the new flagpole for the first time. It was then lowered to half-staff while those in attendance recited the Pledge of Allegiance followed by the playing of Taps by Chris Jernigan.

“Thank you for joining us on this fine Sunday afternoon,” he said. “We offer our thanks to all that took part in the ceremony, especially saying thanks to the Woodmen of the World for this donation to our fire department.”

“We honor and remember those who have sacrificed their lives to protect others; we lift up those who protect this amazing country. We ask God to protect those who go into danger, from this community and from across this nation, to serve others,” Pond offered during prayer.