AHOSKIE – An Ahoskie man, who apparently made recent comments that he may cause harm to himself, is reported missing.

The Ahoskie Police Department is seeking the public’s assistance in helping to locate the whereabouts of 21-year-old Davarious Wilson. 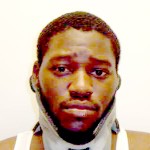 “Mr. Wilson left that residence and hasn’t been seen since,” said White. “He also has made several comments about doing harm to himself, therefore locating him to ensure his well being is crucial.”

Wilsonis described as a black male, 6’-2” tall with brown eyes, short hair and a short beard. He was last seen wearing gray Polo shoes, a black shirt, and gray or black sweat pants.

White added that Wilson also has an injury which requires him to wear a neck brace.

Anyone with information on the location of Davarious Wilson is asked to contact White at (252) 332-5011.

“Your assistance in this matter is greatly appreciated,” White stressed.

AHOSKIE – The lives of local men whose names are synonymous with athletic success will be remembered here Oct. 12.... read more