The bride was given in marriage by her parents and was escorted by her father.

Miss Anna Caitlin Skinner of Ayden, friend of the bride, served as maid of honor.  Other friends who served as bridesmaids were Miss Allison Brook Frazier and Miss Erin Jacylyn Savidge of Ayden, and Miss Hayley Carol Grady, Mrs. Rhys Myrik Potts, and Miss Tonina Stango, all of Greenville.

The groom’s father served as best man.  Groomsmen were Zachary Thomas Vinson of Murfreesboro and Cola Ralph Vinson of Knightdale, brothers of the groom, Brandon Cannon Garris of Ayden, brother of the bride, Rufus Jennings White IV of Pendleton and Dan Russell Crowder of Greenville, both friends of the groom.

Mrs. Patricia Stokes served as wedding director.  Miss Lara Brickhouse of Greenville, friend of the bride, Mrs. Beth Garris Kirkland, aunt of the bride, and Miss Dava Kirkland, cousin of the bride and both of Farmville, served as registry attendants.

Immediately following the ceremony, a reception and dance hosted by the bride’s parents was held at The Washington Civic Center.

An after-rehearsal dinner was hosted on the eve of the wedding by the groom’s parents at Flair by Sharon in Washington.

Both the bride and groom are graduates of East Carolina University.  Nicole is a special education teacher employed with Pitt County Schools.  Josh is a chemical technician employed with Universal Leaf Tobacco Company, Inc. in Wilson.

After a honeymoon trip to the Dominican Republic, the couple will reside in Greenville.

June 13 – A miscellaneous bridal shower was hosted by the exceptional children’s teachers from Wintergreen Intermediate at the Daily Grind.

June 24 – A luncheon and shower was given by the Rountree Christian Women’s Fellowship at the church in Ayden.

July 8 – A miscellaneous bridal shower was hosted by Janice Rogers, Donna Huggins, and Karen McGlohon at the home of Bernice Cannon in Ayden.

July 13-15 – A bachelorette weekend was given by the maid of honor and bridesmaids in Charleston, SC.

July 21 – A bachelor party was given by the groomsmen and friends in Greenville.

July 29 – A monogram shower was hosted by Kay Murphy and Susan Dunning at the Murphy home in Snow Hill.

August 4 – A bridesmaids’ luncheon was hosted by Beth Kirkland, Barbara Smith, Pam Vinson, all aunts of the bride, and Nina Paul Vinson at Dail’s in Farmville. 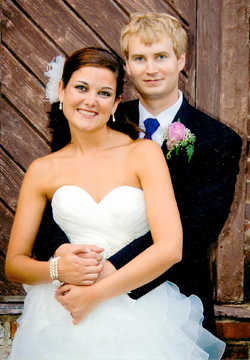 Mr. and Mrs. Chet Hill of Mooresville announce the engagement of their daughter, Melissa Hill, to Ryan Wheeler, son of... read more