Have you seen her?

WOODLAND – Nearly a half-century after her mysterious disappearance, there’s now a face to go with Phyllis Lorrain Powell’s name.

On Sept. 15, a forensic artist from Canada crafted a likeness of the child’s five-year-old face, an effort that will hopefully aid the Powell family as they continue to search for answers over their loved one’s disappearance from Woodland on Jan. 11, 1963. 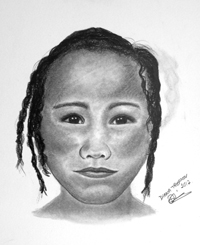 This likeness, created by a Canadian forensic artist, is of Phyllis Powell who was 5 years old when she disappeared from her Woodland neighborhood in January of 1963.

“Myself and my brothers and sisters all agree that this is what Phyllis looked like at age 5,” said William “Buddy” Powell of Woodland. “After 50 years, there is still hope that someone in this world will see this picture and say it looks like someone I know.”

Up until this point there are no known photographs of Phyllis Powell. That changed when Diana Trepkov agreed to assist in this cold case. Trepkov is officially a Certified Forensic Artist through the International Association for Identification. She has been involved in over 100 law enforcement cold cases throughout Canada and the United States which involved her forensic artwork techniques such as composites, 2D and 3D facial reconstructions, postmortems, surveillance video drawing and age progressions. Trepkov recently helped to solve four high profile cases in the USA.

Trepkov caught a flight to Wilmington, NC where she met Lori Roberts of the CUE Center for Missing Persons, the organization that footed the bill for the artist’s trip from Canada. That duo drove to Woodland to meet with Buddy Powell and his sister, Joyce Powell Parker. After five hours of painstaking work, which also involved speaking with the Powell family and soliciting their recollections of what their little sister looked like back in 1963, Trepkov created Phyllis’ likeness.

“This case was very emotional, the brother and sister cried hard and loud when they saw the finished drawing,” said Trepkov in an email correspondence with the Roanoke-Chowan News-Herald this past weekend. “They never had a photo of their sister from 50 years ago.”

Trepkov said she was able to pen the drawing following an interview with Buddy Powell and Ms. Parker.

“I was able to take them back to the time they last saw little Phyllis,” she said. “I also used a (facial) feature catalogue for some reference. In the end they gave it a 10 out of 10. It was an awesome experience.”

Trepkov added that an image was made of Phyllis Powell not too long ago, but the brother said it looked nothing like his sister and the artist just left it as drawn.

“I told them I will not stop until I get the image from both of your heads down on paper perfectly,” Trepkov noted. “I saw the doubt in their eyes, but in the end they were shocked and cried. They said it is her (Phyllis) 100 percent. They took a photo of the drawing and sent (iPhone) to Rochester, NY to show the other two sisters of Phyllis; they thought it looked like them when they were young, then they said. ‘it is Phyllis’.”

Trepkov added, “To do this kind of forensic art drawing is sometimes exhausting, but rewarding at the same time. We all got along great as they are both amazing people. My heart goes out to them and so many families of missing loved ones.”

Buddy Powell said Trepkov promised to take this one step further by drawing an age progression photo of Phyllis, hopefully having it ready by the 50th anniversary of the disappearance in January of next year. Both photos will be displayed on a Facebook page dedicated to Phyllis L. Powell.

“No matter the outcome, to God be the glory,” Buddy Powell said. “The Bible says we have not because we ask not. So I’m asking everyone that sees this picture to search your mind, search your heart and say it’s time to bring closure. God bless you all and God bless the Powell and Vinson family.”

Phyllis Powell vanished from Ashe Street in Woodland never to be seen or heard from again.

“After all these years, we still have no answers,” said Buddy Powell. “Not only did my mother and father go to their graves without knowing what happened to their little girl, but a lot more family members have passed on as well. But I’m still here and as long as the good Lord lets me draw a breath, I’ll continue to look for answers.”

For Powell and other surviving members of his family, they still live through the agony and pain of Jan. 11, 1963 when the news was revealed that Phyllis was missing. She disappeared at around 12 noon that day while playing in the area of NC 35 and Ashe Street in Woodland. Despite a massive search on the ground and in the air involving over 200 individuals, there were no clues discovered on the little girl’s whereabouts, other than a set of small footprints found in an area bordered by a thick woods about one mile from where little Phyllis went missing.

A few years ago there was a ray of hope for the Powell family. DNA tests performed on Powell and his brother, Joseph Powell, came on the heels of a cold case involving human bones discovered decades ago in the northwestern part of Northampton County. However, those tests did not reveal a DNA match.

Meanwhile, a Winston-Salem woman, Betty Brown, has shown much interest in the Powell case. As a member of a family with a missing relative of their own, Brown played a pivotal role in getting the DNA tests performed. Brown also contacted the Powell family about using advanced technology to perform another ground search of the area around where Phyllis went missing.