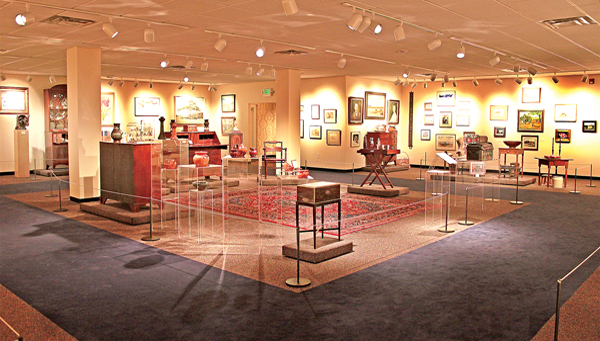 Consisting of almost 90 original works of art and more than seven noteworthy pieces of antique furniture, the new Fine Arts Center represents Jenkins’ talent as a collector and generosity as a supporter of Christian higher education at Chowan University.

“The gallery is another symbol of Chowan’s growth and development over the past several years,” stated Vice President for Development John Tayloe. “With such a broad range in artistic styles and mediums, the gallery is one of a kind in this region.”

Artists include John Silver, whose well-traveled painting once hung in the residence of U.S. Ambassador James P. Cain in Denmark through the Art in Embassies program; Edward Potthast, with possibly the most renowned new addition to Chowan’s art collection; and fantastic regional artists like Cecelia Anne Hill and M. Charles whose scenes from the Outer Banks capture its pure naturalism and spirit. The artistic styles of the almost 50 featured artists range from perfect portraits from Joseph Blackburn to modern art abstracts from Walter Thrift to Pop Americana from Daniel Kessler. The detail in the furniture showpieces highlight an age of craftsmanship unrivaled today.

“There is no other collection quite like this on exhibit in any museum or school in North Carolina,” explained Chowan President Dr. Chris White. “With this kind of collection, the variety in oils, watercolors, acrylics and others, as well as period furniture, it’s an art gallery that’s a museum.”

The Wayland L. Jenkins, Jr. Fine Arts Center is located on the first floor of Thomas Dining Hall in close proximity to the Chowan Room used for specialty dining and conference meetings. Other furniture and furnishings are prominently displayed throughout campus and especially in the Camp President’s Home.

Jenkins knew there were any number of places he could have donated his collection, but he wanted it close to his home in Aulander. As his own experiences in college triggered a lifelong passion for collecting art, he hopes this center would foster an appreciation of art in the children of this area and students at Chowan University. For many, this might be their only chance to visit a gallery.

To unveil the Fine Arts Center, the University Club at Chowan held a Gala Opening on Sept. 14 with more than 200 of Chowan’s benefactors and friends and family of Wayland Jenkins gathered to celebrate the new center. The facility was completely remodeled to house and showcase this stunning collection of works. Among those attending was Helen Revelle Cain from Raleigh, wife of the former U.S. Ambassador to Denmark, who took great pride in seeing her familiar John Silver piece in its new home.

Wayland L. Jenkins, Jr. has spent a lifetime building his extensive collection featuring a large number of local artists from the three states he has lived in – North Carolina, Virginia and Florida. With successful business holdings in Aulander and Ahoskie, Jenkins and his brother Joseph Henry Jenkins have a passion for northeast North Carolina, including historic preservation efforts at Hope Plantation, in historic Murfreesboro and throughout the surrounding Roanoke-Chowan area.

In 1999, Jenkins was instrumental in organizing and funding the Bertie/Hertford affiliate of the North Carolina Community Foundation. Jenkins’ interests are broad and many educational institutions, churches, civic, historical, and charitable causes continue to be beneficiaries of his generosity. The Wayland L. Jenkins, Jr. Fine Arts Center is a means of sharing his appreciation of art and furnishings with the many students and visitors who will grace the Center.