Matron of honor was Mrs. Bonnie Miller of Elizabeth City.  Bridesmaids were Miss Kristen Herto of Suffolk, cousin of the bride, and Mrs. Heather Martin Hill of Elizabeth City.  Miss Grayson Boyce and Miss Madison Boyce, daughters of the groom, were flower girls.

The bride is a graduate of COA with an associates degree in nursing. She is presently employed in the Albemarle Hospital Emergency Room and also as a flight nurse with Nightingale Regional Air Ambulance.

The groom is a graduate of ECSU and earned a bachelor’s degree in criminal justice.  He is currently employed with the Elizabeth City Police Department.

After a wedding trip to Ocracoke, the couple now resides in Elizabeth City. 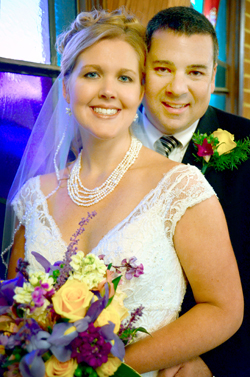