Mr. and Mrs. Matthew Shane Brooks of Gates announce the engagement of their daughter, Shayna R. Brooks, to George B. Twyne, son of Eddie Twyne of Manteo and Pam Marrow of Plymouth. Miss Brooks graduated with honors from Gates County High School in 2007 and received her dental assistant degree from Martin Community College in 2009. Mr. Twyne graduated from Manteo High School in 2004 and received a Criminal Justice Degree from East Carolina University in 2011. Both are employed with companies in Greenville. Miss Brooks is the granddaughter of the late Donna Lee Boynton. Mr. Twyne is the grandson of Lois S. Twyne and the late Donovan F. Twyne and KC and Sheila Norris. The October 2012 wedding will take place at Manteo Baptist Church in Manteo. The couple will reside in Greenville. 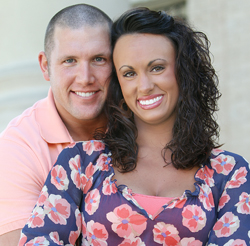