Mr. and Mrs. Tim Emory of Kelford and Mr. and Mrs. Randy Allen of Colerain announce the engagement of their daughter, Crystal Faye Allen, to Michael Dail Bazemore, the son of Mr. and Mrs. Brad LaJoie of Plymouth and Mr. and Mrs. Dail Bazemore of Ahoskie. The bride-elect is the granddaughter of A.J. and Faye Lassiter of Kelford and the late Earl and Ida Mae Allen, formerly of Ahoskie. The groom-elect is the grandson of the late Herbert and Marie Furlough, formerly of Plymouth, Nadine Bazemore of Ahoskie and the late Alton Bazemore. The wedding will be held at 2 p.m. on Saturday, October 15 at Askewville Assembly of God. 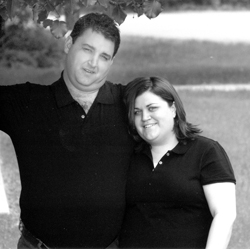 Mr. and Mrs. Matthew Shane Brooks of Gates announce the engagement of their daughter, Shayna R. Brooks, to George B.... read more